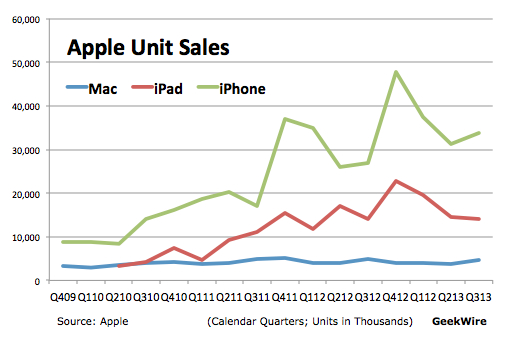 Apple sold 33.8 million iPhones — a 25 percent increase and a record for its September quarter — and beat Wall Street’s expectations with revenue of $37.5 billion and earnings of $8.26 per share, according to results just posted for the company’s latest quarter.

The results include the first week of sales of the iPhone 5C and iPhone 5S, which launched on Sept 20. They do not include numbers from the latest versions of the company’s Macs and iPads, which were unveiled last week. The iPad Air launches on Nov 1.

iPad sales rose slightly in the latest quarter, to 14.1 million units, from 14 million a year ago.

Mac sales were down compared to the same quarter a year ago, slipping to 4.6 million units, from 4.9 million units previously. The broader personal computer market has been feeling the effects of cannibalization by tablets, including Apple’s iPad.

Analysts had predicted Apple’s revenue for the quarter at $36.8 billion, with earnings per share at $7.93.