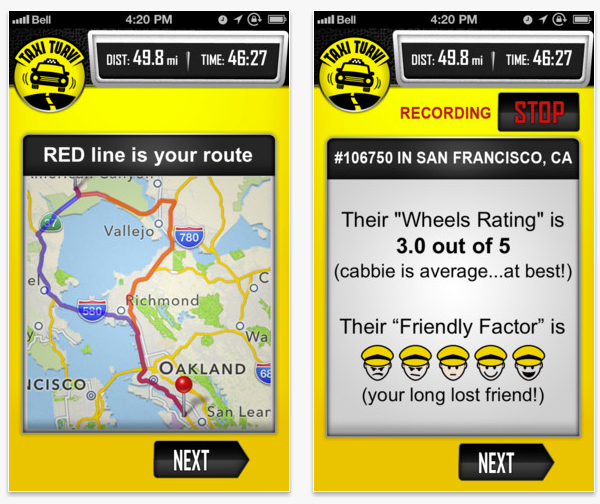 You’ve probably been there before. You’re traveling in an unfamiliar city, and you need to take a taxi to someplace you’ve never been before. You hop in the back seat, inform the driver of your destination … and get taken for a ride, literally and figuratively, as the driver goes on the most indirect and circuitous route possible to artificially inflate your fare.

This is what happened to serial entrepreneur Chip Overstreet when he was in London a year ago and needed to take a cab from the convention center to a local restaurant.

“I was almost certain the cabbie was taking me in a big circle,” explains Overstreet. “The ride cost 40 British pounds, and I checked later and realized it should’ve cost about 12. At that point, I realized I had everything I needed there in my mobile phone, to know if I was being taken for ride.”

The result is the new app Taxi Turvi for iPhone. Once in the back seat of the cab, you press ‘Start,’ and when you get to your destination, hit “Stop.” The app records your route along the way, shows you the route that was taken and also the route the driver should have used.

The app rates the driver for effectiveness and recommends a tip. Other features include the ability to enter your taxi driver’s permit or cab number to view and contribute to their collective rating. Also, by asking for this number, the passenger can let the cabbie know that the route is being monitored.

“Most people (taxi drivers included) are inherently risk averse — if they think there’s a chance that they’ll get caught at doing something wrong, they are much less likely to try doing it,” says Overstreet, who recently returned to Spokane, Wash., after working for years in Silicon Valley.

The free Taxi Turvi app is available here for iPhone.

Listen to the segment via the audio player below.