Julep founder Jane Park pauses near the end of our interview, and just lays it out straight when it comes to her recent venture capital fundraising efforts.

“There’s nothing like talking to a roomful of men about nail polish,” says Park with a laugh.

Obviously, the men were paying close attention to Park, who is building a new type of cosmetics company that wraps together e-commerce and bricks-and-mortar retail in one very unique package.

(Interestingly, as you may recall, Maveron and Andreessen Horowitz also recently worked together to bankroll Zulily, the daily deal site for kids’ apparel and toys which raised $85 million at a $1 billion valuation last year.)

Total funding in Julep, which employs more than 160 people between its retail and e-commerce operations, now stands at $20.3 million. In addition to the funding, Zillow CEO Spencer Rascoff has agreed to join Julep’s board.

Julep is an unusual startup: Part brick-and-mortar retailer. Part cosmetics developer. And part e-commerce company. In fact, we’ve had a hard time classifying Julep here at GeekWire, debating whether it should be included in our GeekWire 200 list. (Given the latest news, I think we’ll add Julep into the mix).

A former Starbucks executive, Park says her mission is to develop an “enduring beauty brand” that taps into the power of e-commerce.

As it stands now, Julep sells a wide variety of beauty products on its Web site, everything from hand cremes to cuticle oils to nail polish. Everything sold through the site is developed and marketed under the Julep brand, making it different from other online retailers that attempt to sell a large assortment of goods from multiple merchants. Julep also uses social media channels to crowdsource product development, introducing 52 new products last year.

“We are able to release more products, more rapidly with actual crowdsourced input from our social media fans since we innovate rapidly,” said Park, whose mantra is that beauty  is about connections rather than competition.

Even more interesting, Julep is taking a “clicks-and-mortar” approach to business. It operates four nail parlor salons in the Seattle area, using them as a test bed to trial new products. Park also is a regular on QVC, the televised home shopping network.

For Park, the distribution channel doesn’t really matter that much, and she thinks some online retailers lose sight of the bigger opportunity when they view the world via the lens of all things digital.

“I think where online players have gotten it wrong to begin with is that they are not thinking about it as a brand, they are thinking about it as distribution defining their business model,” said Park, who declined to disclose revenues or what percentage of the business comes via online versus brick-and-mortar.

Nonetheless, e-commerce is a huge part of what Juelp does, and that’s where she sees plenty of opportunity. Park calls the market “under penetrated when it comes to online sales.” 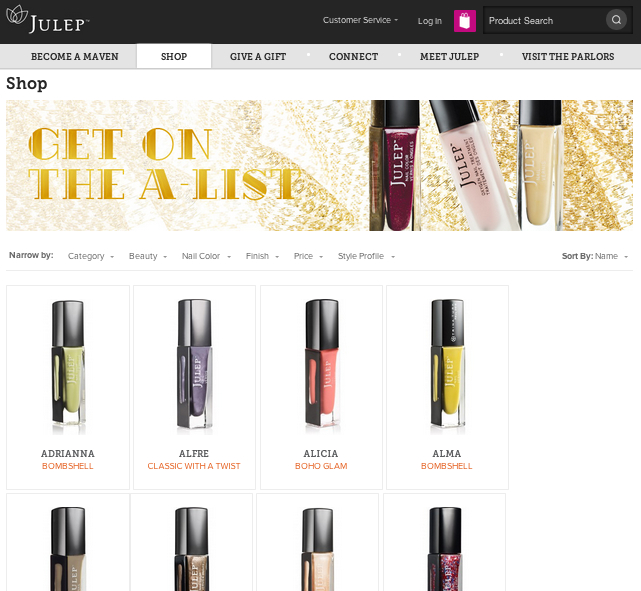 Park tells GeekWire that she’d love to establish new flagship stores in locations such as LA and New York (where some of her celebrity investors reside). But that’s not really part of the 2013 game plan.

The new cash will be used to expand the online product line, making a push into hair care, skin care and other product offerings.

“We have a lot of product ideas that we want to bring to market,” she said.

Asked who she sees as her number one competitor, Park points to Estée Lauder. Others floating in the space include Birchbox, which delivers samples of makeup to consumers each month. It raised $10 million in funding in 2011. (Julep also offers a monthly subscription service known as Maven, charging customers $20 per month).

Julep is different from Birchbox and other online retailers like drugstore.com’s Beauty.com, since it focuses exclusively on selling its own products. And Park, who notes that her biggest challenge remains maintaining the culture as they grow, said that likely will not change.

“We want to control every element of the customer experience,” she said. “That gives us much more freedom.”