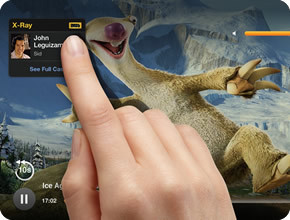 Amazon’s ownership of IMDb, the widely used Internet Movie Database, might have been a head-scratcher or a novelty in years past. But all that data is becoming increasingly useful to the company, and an announcement this morning is the latest case in point.

This is the feature on Kindle Fire HD tablets that lets viewers tap the screen to bring up a box with more information about the actors in a particular scene, letting them click to find out more about each cast member.

X-Ray is also available for the Amazon Instant Video App on the Wii U console.