Amazon.com is expanding its Seattle footprint yet again.

The map to the right shows the locations, with Phase VII in blue and Phase VIII in yellow.

“Amazon’s continued growth in South Lake Union is a testament to its continued commitment to our city, helping create more jobs and contributing to the positive transformation of the neighborhood into one of our region’s most vibrant and exciting communities,” said Ada M. Healey, vice president of real estate at Vulcan.

Vulcan led development of Amazon’s first six phases, selling the campus for $1.1 billion to the online retailer last October.  These new buildings, which will cost $266 million to put up, will have approximately 4,000-to-4,500 square feet of retail space along with around 435 underground parking spots each. Construction will begin in January of next year and end sometime in late 2015, with Amazon signing a 16-year lease.

Amazon is more or less taking over the South Lake Union area, a once gritty section of the city north of the downtown core. The new buildings would be in addition to Amazon’s plans for the Denny Triangle neighborhood, which would include three skyscrapers totaling some 3.3 million square feet. As part of that development, Amazon is looking to build a massive spherical greenhouse-like structure.

Amazon also recently expanded with a new 10-year lease for about 140,000 square feet at the Metropolitan Park North building. And it has begun work on the 380,000-square-foot project of two connected buildings and open space along Westlake and 9th Avenues, between Mercer and Republican Streets. 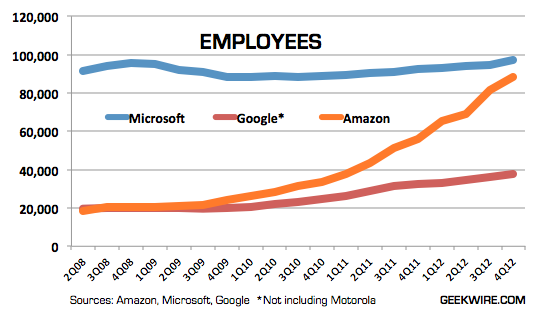 Previously on GeekWire: Images: Amazon.com wants to build a massive biosphere in Seattle (perfect for workers and mature trees)