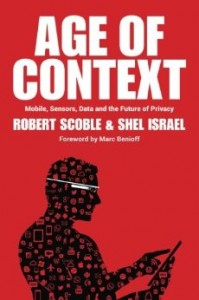 When asked what the future of personal technology might look like, I usually refer the questioner to Rainbows End. This near-future vision from Vernor Vinge, which won the 2007 Hugo Award for Best Novel, is set in California in 2025. Just about every object in the world is networked; libraries are becoming extinct as all the world’s books are digitized; and smart clothing plus ubiquitous wifi and heads-up displays powered by contact lenses mean most experience life as an augmented reality.

But now I have another recommendation, one grounded in the technology of 2013: Age of Context by Robert Scoble and Shel Israel. Like their prior collaboration, Naked Conversations, the book contains vignettes of early-stage technology and technologists upon which the authors extrapolate to a possible future.

And like its predecessor, it is unabashedly optimistic (some might say libertarian) in outlook. Yes, there are requisite nods to issues around privacy and ownership/use of mountains of personal data. But these caveats are tiny speed bumps in a journey powered by technological possibilities.

They write, “At the end of the day, the technology has always been and always will be just a set of tools for people to use or abuse as they see fit. We can gush about the virtues or agonize about the dangers until we turn purple.”

So if you are looking for a book that explores the social consequences of technological change, this is not the book for you.

But if you are interested in “what if” and spend most of your day focused on the challenges of implementing today’s more mature technologies, by all means, pick up a copy.

While not a Cliff Notes edition, the book is a quick read that identifies technologies, companies and thought leaders in fields as varied as breast cancer and “driverless” cars. The elements tying the book together: mobile devices (in 2012, the number of cellphones in the world exceeded the number of people); social media (think digital public squares that have private nooks); “big data” (like pornography, a concept with a fuzzy definition that rests in “I’ll know it when I see it”); computerized sensors (the foundation for The Internet of Things); and location-based services (why Google Maps matters).

Google Glass was an inspiration for the book, which Scoble and Israel announced last July. If you’ve not had the chance to slip on Glass or you think it’s just another fad (you know, like blogs and Twitter were labeled, once upon a time), this section alone is worth the price of admission. Israel’s description of his “before and after” experience mirrors my own: “he immediately wanted one.”

Israel’s Facebook post the following morning reflected: “[Glass] is the most immersive technology I have ever experienced. It will get a lot better and cheaper. It will change the world — probably not the world of aging Boomers like me; but such devices will be an essential component in the world of my grandchildren. Their lives will be better for that fact.”

Scoble is known for his enthusiastic endorsement of Google Plus, but the authors do not engage in Google worship. For example, Google is at the center of two anecdotes that illustrate how GoogleNow is just as tone-deaf regarding privacy as GoogleBuzz was upon its introduction.

Because I teach social media and the social impact of technology, the sections related to marketing were less illuminating. Ditto the “contextual self.” I’ve been wearing a personal monitoring device (FitBit then Up) for two years, and my students introduced me to Japanese smart toilets about five years ago. The lesson here: each section may or may not serve up something new, depending on how deeply you’ve been thinking about or reading about trends.

Given the current political furor over the Affordable Health Care Act, the implications for personalized medicine and early detection may be the most important bits, and they are interspersed throughout the book. For example, Pairasight’s 3D, stereoscopic, two-way livestreaming glasses might improve health care, not just domestically but globally, by allowing specialists to assist geographically diverse patients without the need for travel. And wearables can provide “safe zones” for people who have cognitive disorders. Smart toothbrushes. Improved hospital hygiene. And a cancer-detecting bra, currently in testing at Reno-based First Warning Systems, Inc.

There’s one disturbing possibility that the authors sidestep. Scoble and Israel envision a world where businesses know who you are when you step through the door (a necessity for personalized service).

[S]tores will know whether you are a frequent buyer or someone with an arrest record for shoplifting, and you will be treated in the context of who you are.

Think about that for a moment. A one-time lapse in judgment, perhaps egged on through peer pressure, could shadow you and affect how you are treated for the rest of your life. This scenario puts to shame the handwringing that college photos shared on Facebook might prevent someone from having a successful political life.

And this is how I would prefer everyone read the book. Not just as a testament to whiz-bang, gee-whiz, science-fiction-like technology but with a critical assessment of its social, legal and political ramifications. Law is notorious for lagging technologically-induced change, and incumbent organizations often use law and regulation to suppress disruptive change.

The technologies Scoble and Israel profile are not inevitable, and their implementation may not prioritize consumer well-being or minimize negative social externalities. The authors believe what the world looks like 25 years from now is “really up to us.” I don’t share that optimism.