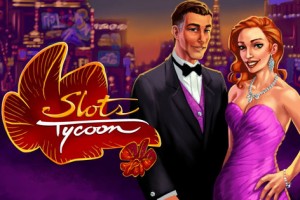 Slot machine giant International Game Technology last month indicated that it planned to push its newly-acquired Double Down Interactive unit deeper into mobile gaming, diversifying the Seattle unit beyond its base of Facebook-oriented games.

“It is all about mobile, mobile, mobile for us in the Double Down area,” noted CEO Patti Hart. But IGT isn’t the only one rolling the dice on slot games as mobile apps. Today, Seattle upstart Zipline Games is officially taking the covers off Slots Tycoon, using its Moai mobile development platform to roll out the free title on both Android and iOS.

“We wanted to try something different from puzzles after Wolf Toss, and we ended up playing some of the top slots titles and saw there was an opportunity for a Moai powered game with great production values,”  said Zipline’s Todd Hooper.

At this point, the game has five casino themes, including “Dragon’s New Year;” “Tropical Bounty:” and “Lucky Diner.” (I just won a virtual set of coins on Slots Tycoon, and was able to send them via Facebook to Zipline’s Mike Arcuri) Hooper said they plan to unveil new themes in the coming weeks. Users can obtain coins for free for watching videos or other activities, or purchase virtual coins ($4.99 gets you 1,500 coins).

Last month, Zipline announced a new funding round, and alluded to the arrival of Slots Tycoon. Now that it is actually here, what do you think?

Previously on GeekWire: Facebook tests UK gambling in possible preview for US

Here’s a short promo video of the new casino-style game.