With all the social networking and such online it was only a matter of time until shopping got more into the act, too. Zappos has announced a new page called PinPointing that recommends products based on Pinterest posts. 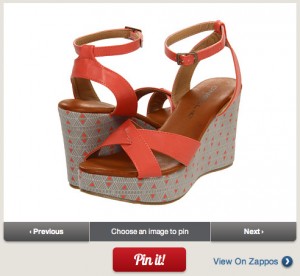 Young said the idea behind PinPointing is that “social shopping is a total buzzword that people throw around, but I don’t think any big brands have cracked it…When we talk to people and ask what they think is the best social-shopping experience, they say Pinterest, and it’s not even a retailer.”

Bloomberg also suggested the move comes, in part, so Zappos can “debunk its reputation as solely a seller of shoes.” And, as its parent company Amazon has really amped up its fashion offerings, it makes sense that Zappos is looking for different ways to highlight its various products. Pinterest “has seen a surge in user growth,” reporting 11.7 million visitors as of January 2012. The social-networking site has also raised $100 million in financing, valuing the company at $1.5 billion, according to Bloomberg.