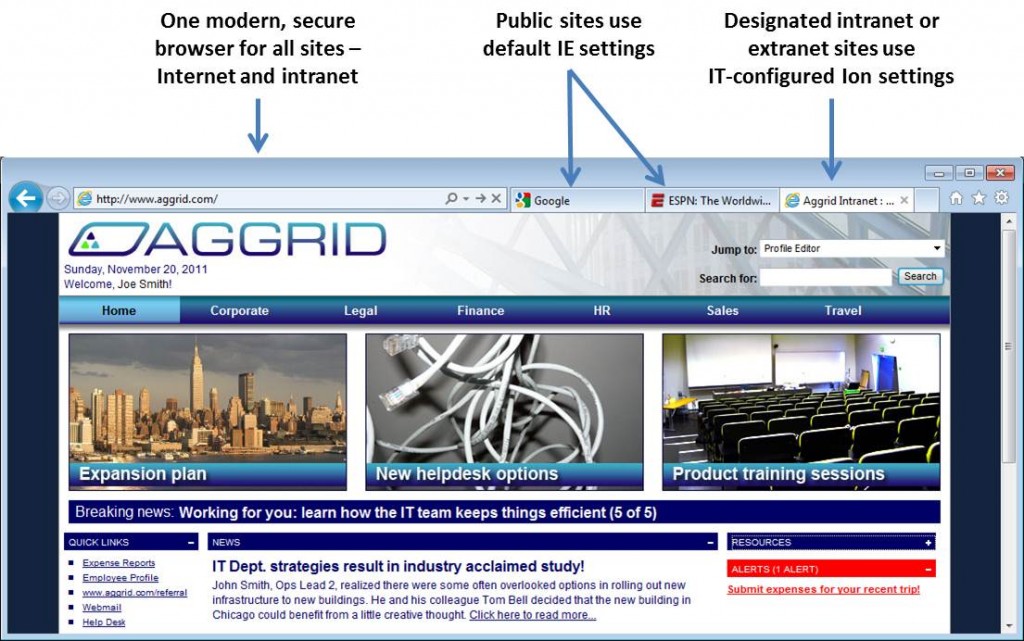 For all of the advances in computer operating systems and web browsers over the last decade, walking into some companies in 2012 can feel like a time warp, and not in a good way.

A huge number of business applications were written for Microsoft’s Internet Explorer 6, which isn’t supported on Microsoft’s Windows 7 — preventing many companies from upgrading to new PCs running the latest software.

Browsium, a Redmond-based company run by a team of former Microsoft managers, is taking a new crack at the problem.

The startup this morning announced a second-generation product called Browsium Ion that lets companies run their legacy web apps — originally written for IE6 — in the newer versions of the Microsoft browser, IE8 and IE9, supported on the latest Windows versions.

Microsoft probably won’t be shouting about this from the rooftops. The company would still prefer to see businesses rewrite or replace their legacy apps to work on newer versions of the browser and the operating system. But if it takes off, Browsium Ion could help more companies upgrade to Windows 7. Microsoft estimated last summer that two-thirds of businesses were still running Windows XP.

One of Ion’s more impressive tricks is the ability to run an old web app in one tab — using specialized settings and a legacy version of Java — next to web pages and apps in the same browser running the latest interactive technologies and settings in adjacent tabs. It also works when browsing backward and forward between a modern web page and a legacy app, switching the settings automatically on the fly.

The company says its solution is faster and less expensive than using virtualization to run IE6 on a newer machine.

“The idea is that IT controls all these settings with a tool we provide,” explained Browsium president Gary Schare, the former head of the Internet Explorer product management team, during a demonstration of Browsium Ion.  “To the end user it’s transparent.”

Browsium was founded by Matt Heller, a former Overture Services executive who also worked previously with Microsoft on Internet Explorer. The company’s CTO is Matt Crowley, a former program manager on the Internet Explorer and ASP.NET teams.

The company’s first-generation product, UniBrows, solved the problem by hosting the IE6 engine natively in IE8 and IE9, an approach that worked well but created potential problems with Microsoft’s licensing policies.

Browsium Ion instead uses engines that are built into IE8 and IE9, including “Adaptive Quirks” mode and the IE7 engine, along with a customizable string replacement feature to override and replace specific instances of problematic code.

It’s sold for a yearly subscription, with pricing varying depending on number of PCs. The company says existing UniBrows customers can upgrade for free.