Will iPad lovers give Windows 8 tablets a chance?

That’s the question we asked for this week’s installment of Geek on the Street. GeekWire stood outside of the Apple Store in Seattle’s University Village, and showed people who came out of the store a tablet running Microsoft’s new operating system.

The hardware we used was the very basic Samsung slate that Microsoft has given to developers and journalists for testing, not a Microsoft Surface or any of the nicer devices that will be launching with the new operating system. We focused their attention on the user interface, and even without the best hardware, the reaction might surprise a few people.

Microsoft plans to release Windows 8 on Oct. 26, and it’s counting on the new touch-friendly interface to compete with the iPad and other tablets.

We ended up talking primarily with people who already own iPads or were thinking about buying them, although one diehard PC user also gave us her reaction.  Watch the video to hear the consensus, or read the summaries below. 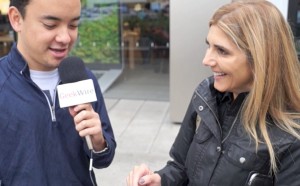 First impressions? “It’s very cool – I like the visuals. I’m very visual and I like the tiles. You can click and point to which one you’re looking for. It’s easy to see as opposed to a tab bar across.”

You have an iPad… “I do have an iPad and ironically, one of the things I just complained on the new Safari update about was that it all went to tabs as opposed to individual boxes when you open Safari. So, I didn’t like that. This is pretty cool and timely.”

Would you consider replacing your iPad? “I would consider getting (a Windows 8 tablet), definitely.”

Are you an Apple or Windows person? “I’m half and half. I am a hybrid. I’m not 100 percent dedicated to either one.” 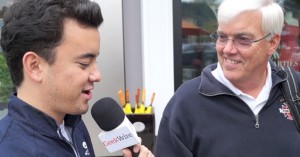 First impressions? “It’s like every new product — they’re cool. That’s why people come up with this stuff – to find out what works better each iteration of the product. It gets better and better.”

Would you buy one? “Microsoft has the best online storage capacity right now so that’d be something to consider. But I’m so wrapped up in Apple I don’t think I would. Everything I have is linked together.”

“I am an Apple guy. Over all the years I had trouble at work with some Microsoft products and viruses. I’ve never had that issue with a Mac. Not to say that isn’t going to haunt me someday, but it’s an issue that hung with me enough times.”

“Once you completely convert, very rarely is somebody going to go back. I’m Apple forever — until they take another bite off the other side of the apple.” 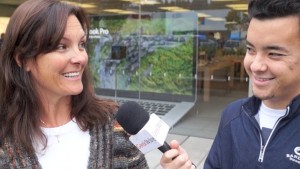 First impressions? “I can just sort of touch and go – I don’t have to push something and then go to it. I just grab from the side with my finger, so that’s really great. It’s clear and the pictures are clear.”

“I can go to my Excel spreadsheet if I’m out where I keep track of my spending. I just bought something at the Container Store and I can just add it on right here.”

Would you buy one over an iPad? “Yes. Everything I do is PC. I get lost as it is and I don’t need to be even more lost with a new product. Microsoft has been great they are very helpful and I like it. I’m invested already in Microsoft. The products are consistently good. I like it a lot, actually. I love my computer. So yeah, I would be game for one of these.” 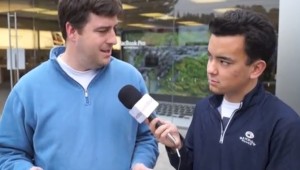 First impressions? “I was hoping this would be good, but I didn’t expect it to be this nice. I think I like the layout. On my iPad, everything is exactly the same size and it feels like I’m staring at tiles after tiles after tiles. So this feels more organized.”

“All I want from a tablet is a good screen, good battery life and a browser. But this looks like it has pretty good resolution.”

Thoughts on the Apple vs. Windows debate? “I doubt I’d be holding a Windows tablet right now if Apple hadn’t been dominating for a while. But Microsoft has been good about responding and looks like they’ve done a pretty good job.”

Would you consider getting one? “For sure. Especially now that I know I can add software. I didn’t know with the iPad if I’d be able to add software.”