On the Microsoft campus this week, hundreds of law enforcement and public safety officials are gathering for the company’s Worldwide Public Safety Symposium.

The event includes a chance to check out Microsoft’s Global Security Operations Center, one of three facilities around the world that coordinate the safety and security of the company’s facilities, and more than 180,000 employees and vendors. 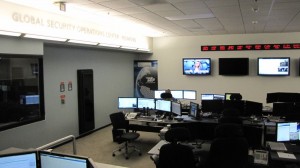 It’s a side of the company I hadn’t seen before, so I sat in on one of the tours yesterday.

It started in an otherwise ordinary conference room. A short time into the talk, one of the walls was suddenly revealed to be a window providing a glimpse into the heart of the operations center, where employees quietly monitored the status of the company’s operations, with television and video monitors and a strip of digital clocks giving the times in key locations around the globe.

Brian Tuskan, Microsoft’s senior director of global security, explained that they rely heavily on data and analytics to look for anomalies, rather than physically keeping an eye on large arrays of video screens.

The tour included a demonstration shown in the video above, in which the Redmond operations were taken over temporarily by the Global Security Operations Center in England. The idea was to show how flexible the operations can be in case of emergency. Just recently, in fact, an out of control car crashed into the front of the center in Redmond, requiring it to be temporarily run from another locations.

The Microsoft facilities are are responsible for overseeing more than 700 locations in more than 100 countries, including some 92,000 full-time employees and 91,000 vendors.

The centers also are a test bed for Microsoft’s software and services in public safety. They use SharePoint to replace operational manuals, Microsoft Lync to communicate with each other, Infopath to create and manage forms, among other technologies.

As part of the conference, the company announced yesterday that the centers have adopted a mapping data service called Visual Command Center from Microsoft partner IDV Solutions, built on top of Bing Maps.

During the demo, Tuskan showed service can be used to quickly zero in on any location in the world after an incident such as a terrorist attack to see how close the company’s buildings and people are to the event, communicate with those people, and quickly inform executives at the company.