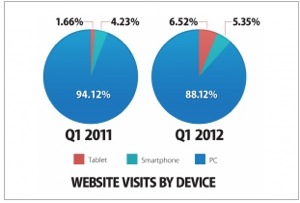 It was bound to happen. With larger, easier-to-view screens and their sheer portability, tablets have now overtaken smartphones as devices for shopping, according to Monetate, a provider of cloud-based technology for online marketers.

As reported by Gigaom, tablets drove more traffic to retail sites than smartphones during the first quarter of 2012, 6.52 percent vs. smartphones 5.35 percent. Tablet traffic also grew 348 percent, while smartphones increased by 117 percent in the last year. And iPad users are king when it comes to tablet retail ‚ they account for 95 percent of that traffic.

Monetate’s stats trump Adobe’s report released in May projecting that tablet traffic would outpace smartphones by early 2013. Tablets are also taking over the PC shopping experience — PC traffic to retail declined to 88 percent, and Monetate estimates that it will continue to drop to below 75 percent in the next year.

And tablet traffic stats are only expected to sharply increase, as more shoppers discover that the tablet experience beats their phones and PCs. Welcome to the so-called new era of “couch commerce,” complete with plenty of images of schlubby consumers lounging on their sofas and buying crap, bringing humanity one step closer to the reality of “Wall-E.”