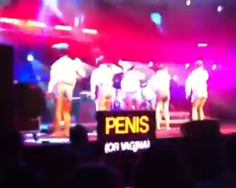 This past weekend we reported on a song and dance routine staged by Microsoft Norway at the Norwegian Developers Conference, with lines including “The words MICRO and SOFT don’t apply to my penis” … “or vagina,” as the on-stage slide added, strangely.

Microsoft has issued multiple apologies for the incident. Now, a post by the conference’s opening keynote speaker, Aral Balkan, explains what happened.

As he explains in the post, Balkan is particularly attuned to issues of sexism in the tech industry. When he was given a preview of the song during preparations for the conference, he wasn’t listening closely to the lyrics, but vaguely heard a reference to “blah blah my penis.” He pointed out that the reference was sexist, something that the representative from Microsoft Norway apparently hadn’t thought about.

Not grasping the context, Balkan suggested they at least add the words “or vagina” to make it more inclusive.

He writes, “Of course, what Microsoft Norway should have done when they realised that the lyrics were sexist was to axe the opening entirely. Instead, they made the decision to go ahead with it and perform the song, complete with dancing girls dressed in tiny shorts (a fact they somehow forgot to mention to me when they played me the song after my rehearsal).”

Balkan adds that Microsoft should go beyond the apology and take steps to make sure it doesn’t happen again.

He notes, “You have to remember that in the age of Twitter and YouTube, nothing is a local event anymore. Every event is global, or can be global, within seconds. And the sooner people and companies understand this, the less shocked they’ll be when something that happens in Oslo comes back to bite them in Redmond.”

Read his full post here, including reflections on other incidents of sexism that he has encountered in the tech industry.