Location-based mobile gaming could very well be the next frontier of the games business. And BodSix wants to make sure that it catches that wave at the right time. The 6-person Seattle upstart, led by former Amazon.com and Jobster product manager Jeff Dixon,  is currently working on a game called Map Monsters that uses one’s physical location as part of the game play. And the chief designer on the game certainly has been around the block a few times when it comes to creating blockbuster, and innovative, gaming idea.s

“I wanted to make it so that players would get value for traveling to new locations, but they didn’t feel like they had to travel to new locations,” explains game creator Richard Garfield in a Kickstarter pitch. Best known for creating the card game Magic: The Gathering, Garfield said that Map Monsters is not a “check-in, and then you’re done experience.” Instead, people can play on their mobile devices without ever leaving the house.

We chatted with Dixon to find out more about BodSix in the latest Startup Spotlight, hearing one of the funnier answers to our question about world domination. Read on for that and more.

Explain what you do so our parents can understand it: “We develop free-to-play location-based social games for mobile phones and tablets.”

Inspiration hit us when: “We realized that GPS, mobile computing, and Internet access had never converged on a single device before, creating a brand new mechanic that had previously been impossible in games. Foursquare was around and people kept talking about it as a game, which we never understood. We wanted to build a location based service that prioritized the game element.”

VC, Angel or Bootstrap: Bootstrap + Kickstarter. With the abundance of free or low-cost Web Services — Amazon Web Services, Dropbox, Google Apps for Business, GitHub, Pivotal Tracker, etc. — there’s little upfront capital necessary to develop, launch and scale a software product. All you need are several smart folks that have the means and psychological fortitude to forgo a paycheck for some time. The emergence of services like Kickstarter, which we are currently testing out and the expected proliferation of services with the JOBS act, will be really interesting to watch. I feel strongly that these services fill a big hole for seed funding.”

Our ‘secret sauce’ is: “Staying product focused. We play a lot of video and analog games, which helps us discover new and interesting mechanics that we can bring to our games. Richard Garfield, creator of Magic: The Gathering and our Chief Creative Officer owns hundreds, if not thousands of games from which to draw inspiration. It’s quite impressive.” 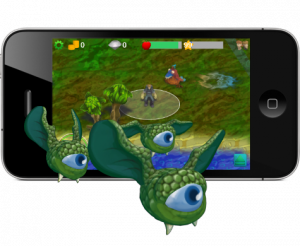 The smartest move we’ve made so far: “Frugality. This doesn’t mean we sacrifice quality in anything we do. Instead, we’re creative about every business transaction and relationship we approach. This gives us a lot of future flexibility.”

The biggest mistake we’ve made so far: “Not doing this earlier. The mobile game industry continues to have enormous tailwinds, but the entry fee required to be successful is slowly going up as more and more deep pocketed companies come off the sidelines and start to buy their way into the industry.”

Would you rather have Gates, Jobs, Zuckerberg or Bezos in your corner: “Jobzos (are dual personality mash-ups allowed?). As a company centered around mobile applications development, it would be silly not to have Steve Jobs in our corner. The Apple juggernaut can make or break companies, if not entire industries. We also appreciate the long-term view of Mr. Bezos. Despite the grief from institutional investors, Jeff has always been a believer in investing for long-term rewards even at the expense of his investor’s short-term time horizons.”

Our world domination strategy starts when: “We complete our first plush toy license.”

We are truly unique because: “Our philosophy for location-based games is different. Most location based games fail because they focus too much on location. Our view of location is that we first should develop a fun game that doesn’t require travel (yes, heresy for a location-based game), but rewards people when they do play from various locations.”

The biggest hurdle we’ve overcome is: “Appreciating the work involved in client-server development. Before this, most of the team had worked only developing web-hosted services or client software. It turns out that building a client-server architecture required for social mobile games is a wee bit more complex.”

What’s the one piece of advice you’d give to other entrepreneurs just starting out: “Everything takes longer than you expect. Things under your control, like development schedules, are not likely to be hit, especially if you’re doing something new, which I hope is the case. Things outside your control, like working with external parties in business development or investor dealings means that you’re subject to their schedule. It’s something that you have little control over, so be aware of it and plan for it upfront.”