Take America’s Funniest Home Videos, add a touch of Fail Blog and CollegeHumor.com and then mix in King of the Web and you’ll come up with BlooperBox. The Portland upstart was founded last June after — and we’re not joking here — co-founder Brad Hogan’s dog chased after a squirrel leashed to a coffee table.

As we like to say, entrepreneurial inspiration hits in all places.

On BlooperBox, five contestants compete each week for votes, Internet stardom and a $50 prize. Right now, you can watch failed flips, belly flops and dives.

We chatted with the 28-year-old Hogan for the latest installment of Startup Spotlight to get the full story behind the squirrel and find out one of the most hilarious world domination strategies we’ve heard in a long time.

Explain what you do so our parents can understand it: “BlooperBox.com is a weekly funny videos contest that pays cash. Each week, 5 videos compete to see who can get the most votes and win $50.”

Inspiration hit us when: “We were at a coffee shop brainstorming a completely different idea we had that would later become Facebook Timeline (glad we decided against that direct competitor). While we were sitting outside of the cafe, my dog Ellie spotted a squirrel and took off towards it. Unfortunately for us, I made the mistake of tying her up to the table instead of my chair. As the table went, so did the coffee, which landed conveniently in my lap. My co-founder Phil (Novara) said: ‘Dude, that would totally win on America’s Funniest Home Videos if I was taping it.’ Shortly after, we ditched the timeline idea and aimed at creating an online funny videos contest.”

Our ‘secret sauce’ is: “We think online entertainment sites like YouTube can be overwhelming with the amount of content (i.e. videos), so instead, we take a handful of funny videos each week and add the excitement of a contest, like America’s Funniest Home Videos but without Bob Saget and the cheesy one-liners.”

The smartest move we’ve made so far: “Gathering over 200 funny videos before we launched. It bought us a buffer in case we have weeks with less video uploads.”

The biggest mistake we’ve made so far: “Taking time off from seeking out new videos. While we did gather 200 before launch, we also assumed video uploads would start coming in automatically after launch. We started going through videos quicker than anticipated, which made us realize that it will be a long time before we can stop recruiting funny videos.”

Would you rather have Gates, Jobs, Zuckerberg or Bezos in your corner: “Steve Jobs. Jobs was a cutthroat entrepreneur that new how to position an idea with an audience even if there were similar ideas within the market. We would pick his brain to help us position ourselves against large video sharing sites like Break.com and CollegeHumor.com.” 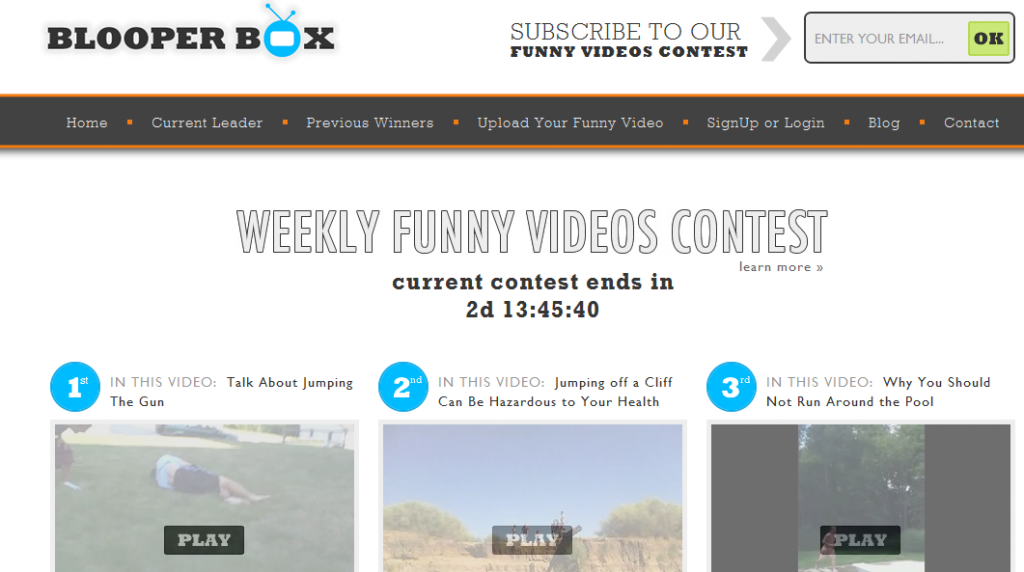 Our world domination strategy starts when: “While you’re coaching your son’s baseball game, your wife is recording from her phone. She just so happens to catch you taking an unexpected foul ball to the groin. Once recovered, you say, “That could totally win, we should send that to BlooperBox.”

Rivals should fear us because: “We are taking an idea that has been proven to work on television and simplifying it for the online community.”

We are truly unique because: “We are the only weekly funny videos contest on the internet.”

The biggest hurdle we’ve overcome is: “Bouncing back from a low-traffic, low-voting week, to get back on pace with our goals.”

What’s the one piece of advice you’d give to other entrepreneurs just starting out: “Listen to everyone, but don’t try to please them all.”