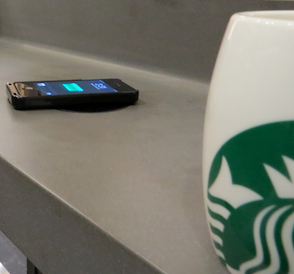 Caffeine for you, electricity for your device?

Starbucks will be testing wireless charging mats for mobile phones in selected Boston-area locations — putting the technology into tabletops to see how people react and use it. Depending on how it goes, the Seattle-based company may ultimately roll out wireless charging more broadly.

Adam Brotman, Starbucks chief digital officer, tells the Boston Globe that “customers are coming into our stores every day with mobile devices, and putting them down on the table. If they could be charging their device at the same time, then we’ve connected with that customer and met their need, maybe even before they realized they had a need for wireless charging.”

The announcement coincides with the news that AT&T, Google and Starbucks have joined the Power Matters Alliance, a group founded by Powermat Technologies and Duracell parent Procter & Gamble. The group is a rival of sorts to the Wireless Power Consortium, the group behind the Qi wireless charging standard, whose members include Energizer, plus Samsung, HTC, Nokia and other mobile phone makers.

Inductive wireless charging for many phones, including the iPhone, currently requires a special case, but others have started integrating the technology into their phones, including Nokia’s Lumia 920 Windows Phone.

Starbucks plans to give out some wireless charging cases as freebies and loaners during the test period in Boston, according to the Boston Globe.

(Photo by Duracell via Boston Globe.)