Whether you’re cheering in the stands at Century Link Field or watching the game halfway across the globe, the new Seahawks Mobile official app released Monday allows fans to stay connected with the team in nearly every way.

While the Hawks did not look very impressive in their season-opening 20-16 loss at Arizona on Sunday, this new free app available now for iPhone, Android and BlackBerry devices seems to be just the opposite.

“Our fans have constantly asked for a mobile app,” said Kenton Olson, Seahawks director of digital media. “It’s now certainly another outlet for them to go to.”

It’s the team’s first official app and so far, so good. The navigation is smooth and the loading times are surprisingly fast. The front page features the team’s last game box score and a running feed of the latest media — written stories, blog posts, videos — taken from the team’s website.

The menu offers nine different tabs, each with a plethora of information. There are statistics on every player, standings and scores from around the NFL and a page to buy tickets. The “12Zone” helps members of the “12th Man” stay connected with social media (Twitter feeds, check-ins) and a QR code reader to allow scanning of printed team media.

And how could you leave out the Sea Gals? The app features bios for every Hawks cheerleader and tons of photo galleries for those who want more than just football.

Olson says it will be even better when the team plans to update the app midway through the season. Potential new features may include live instant replays and in-stadium real-time camera angles. That means you could watch a replay from the stands on your smartphone immediately after a big touchdown or interception — pretty cool.

The app was developed by Pittsburgh-based YinzCam, a mobile sports-technology startup that was founded in 2009. The privately-held company has done work for teams across the NFL, NBA and NHL. There are several NFL teams using YinzCam and some already have the in-stadium features available.

Olson said that the Seahawks used a lot of YinzCam’s core out-of-the-box features but also did a bit of customization with the addition of the Sea Gals page and some push notification elements.

He also added that a Windows Phone compatible app is in the works and waiting for approval from Microsoft. Making sure the app was available to all fans was a priority.

“The most important thing for us was to make sure we launched it across platforms,” Olson said.

The Hawks also have an efficient mobile website with similar features, but the new app is just another convenient and free way for fans to stay connected with added benefits like fantasy football trackers and the potential in-stadium camera angles and replays.

With the big SoDo stadium news announced late Monday night, it will be interesting to see what the addition of an NBA and NHL team might mean for new mobile and web applications. 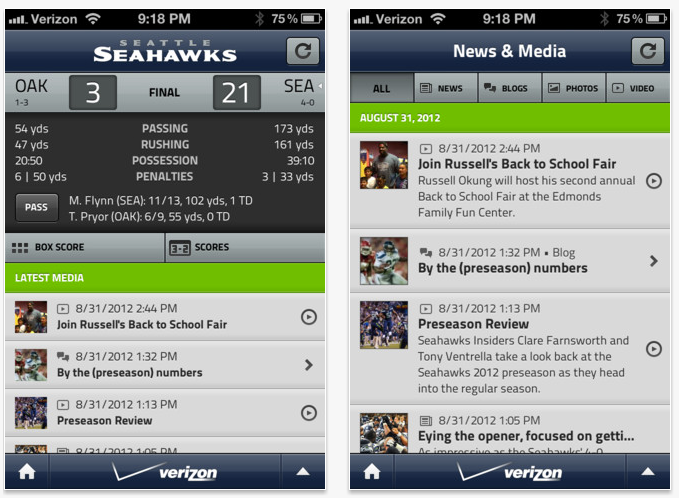