Yesterday, my three-year-old son looked at a review copy of a Surface tablet sitting on my desk and asked this question: ‘Hey, what’s that iPad doing?”

The comment cracked me up, as it signaled just how deep Apple is entrenched in becoming the Kleenex brand of the tablet market. But it’s no laughing matter for Microsoft.

And now here’s more evidence of the fact that Microsoft has a serious uphill battle in the tablet market, especially when it comes to America’s youngest consumers. (And, as we all know, they are the ones who really shape buying patterns of parents).

A new study from Nielsen, which surveyed kids between the ages of 6-12, indicates that their most desirable gadget in the next six months is an iPad (48 percent). That’s up from 44 percent who wanted Apple’s tablet last year. (Gadget hound Andru Edwards of GearLive tried to convince me to buy an iPad Mini for my family on the GeekWire podcast last week).

Interestingly, four of the top five gadgets desired by this young demographic were Apple products.

That’s got to be incredibly concerning to Microsoft, whose Kinect for Xbox garnered a respectable 31 percent of the tally. However, the Surface — which is a brand new device and therefore has yet to gain much market or brand traction — was near the bottom of the barrel at just six percent.

Nonetheless, Apple’s brand penetration with young consumers under the age of 12 should be a huge concern to Microsoft. After all, if they can get a lock on this age group (and there’s a chance that some parents opt for lower-cost alternatives as my brother is considering with his kids with Google Chromebooks) then the chances the next-generation grows up in a Windows world becomes much more slim.

Just for comparison sake, here’s what the product breakdown looks for those over the age of 13. 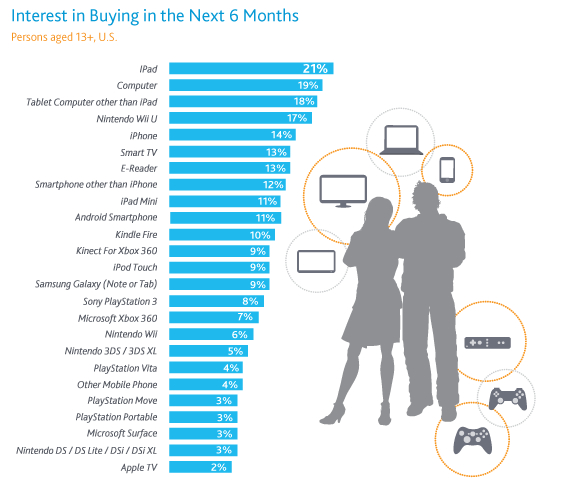