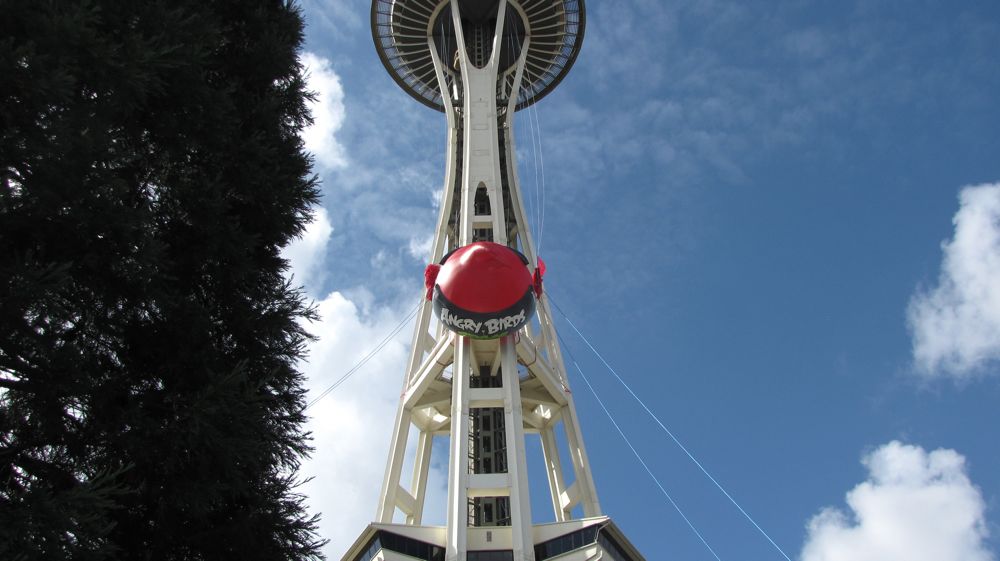 A big thanks to the hundreds of you who tuned in for our impromptu live stream from the Angry Birds Space launch event at Seattle’s Space Needle this year.

And a special thanks to those of you who answered my appeal for a cup of coffee while I was stuck holding my iPhone in the air for two hours.

Afterward, I tracked down Rovio’s chief marketing officer, Peter Vesterbacka — better known as the company’s Mighty Eagle — and finally got some solid answers about what was going on.

Basically, it’s an art piece, not an action piece, as we were hoping. They’re turning the Space Needle into a giant slingshot, but they’re not going to be slingshotting the giant inflatable bird or letting it float into space.

Here’s the story behind the stunt, as explained by Vesterbacka.

“We looked at all things space around the globe and we developed the back story to the game, about how the birds get to space, and if you look at the animation, it’s basically this worm hole that opens, the eggs get stolen, as they usually do, and then they end up in space, and then the birds slingshot themselves through the wormhole. So the slingshot to get to space needs to be pretty big. We figured, OK, Space Needle. Perfect.

“So we came here last year, we talked with the Space Needle guys, and we started a discussion about turning the Space Needle into the slingshot to get the birds into space. It turns out that we could. And then we teamed up with T-Mobile, and invited them to the party, and now we’ve turned — or let’s say, we’re in the process of turning — the Space Needle into a slingshot. Actually not that much will happen, but it will look really cool once we’re finished with it.

“There will be some more things going up so that it will look like a slingshot. It’s more about getting the iconic image of the Space Needle and the bird. It’s like a montage, a picture-taking opportunity.”