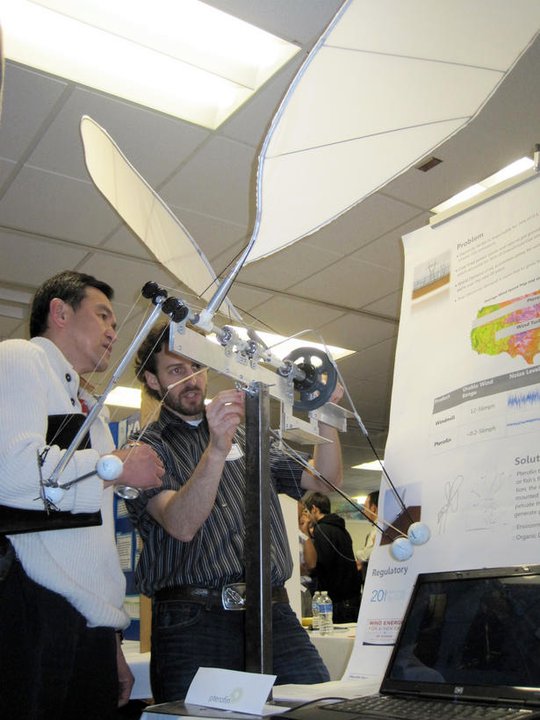 Seattle-based Pterofin has copied designs from nature to develop eye-catching turbines for wind and hydro power. That has earned the company several awards, most recently a semifinalist position in the 2012 Pacific Northwest Cleantech Open. I chatted with Pterofin founder and inventor Wallace Kempkey to get the whole story.

How is Pterofin going to change the world? “Our design enables us to generate power or pump water in situations where a conventional turbine can’t. That can save lives in developing countries and reduce dependence on fossil fuels in the rest of the world.”

What problem are you solving? “The wind turbines available today are expensive. They aren’t viable in the majority of the U.S. where the annual average wind speeds are lower than the Rocky Mountain region where wind power has been successful so far. Turbines can make a lot of noise and if anything fails in high winds, they can self destruct. Even in moderate winds one of the biggest complaints about wind turbines is that they kill birds and bats.” 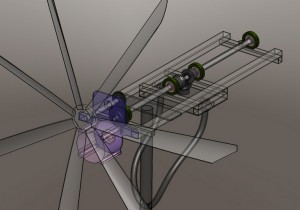 How exactly do you fix that? “I invented a gravity assisted control system that can generate energy when a wing oscillates back and forth. It mimics the motion of a bird’s wing or a fish’s fin — the general field of science is called biomimicry. It has seven major advantages over common wind turbines.”

What are the advantages? “The materials you need to make a Pterofin are plentiful, so it will be cheap to manufacture. Since the wings have more surface area than a turbine it’s able to capture more wind or water energy at lower wind speeds. Besides that, it’s also a lot quieter than a turbine. In high winds it can tuck its wings back and become dormant to protect itself. It’s also a lot more environmentally friendly in terms of bird survivability.

I’ve been told that it’s more aesthetically pleasing than a turbine. Also, the moving parts are a lot lower to the ground, so it’s easier to maintain. It will work in not only residential but commercial and industrial sites. It’s totally scalable. It works not only in the wind, but also in the water. It can harvest energy from oceanic currents, tidal currents, rivers and streams.”

What was your inspiration for this idea? “I came up with the idea about eight years ago to try to reverse engineer the movement of a fish’s dorsal fin. Instead of that animal using energy to create motion, I thought the motion could create energy. I just have always loved to build stuff, so thought it would be a fun project. I kept refining the design and finally, after about the sixth or seventh prototype, it worked really well in front of a fan and I knew I was onto something. What actually inspired me to pursue this idea or project as a business was when some friends from Rotary went to Africa and helped install a well for drinking water. I thought it would be cool if I could apply my skills to possibly keep people from dying from drinking contaminated water. I kept prototyping and that’s when everything started to work.”

How are you funded? “Pterofin is self funded, so far. We’re currently looking for a small amount of investment capital to complete our patents and build a manufacturing prototype.”

What is your biggest challenge as an entrepreneur? “Finding a team of people who I could work with to help bring my dream to life.  I started to work with anyone who was interested in helping, but over time I figured out that I needed to work with people who were not only interested, but also qualified to play a role in the company and available to spend a considerable amount of time on the project.  If someone didn’t possess all three qualities, then it would be a matter of time before I had to look for a replacement.”

This article is one of a series by Denis Du Bois about participants in the 2012 Cleantech Open. Denis is a GeekWire contributor on energy topics, a cleantech marketing advisor, and a volunteer mentor to startups in the Cleantech Open.