It’s no secret that InfoSpace has wanted to expand through acquisitions. The cash-rich Internet search company spelled out its strategy on nearly every quarterly earnings call last year, and over the past few months CEO Bill Ruckelshaus has looked at about 100 different companies.

But on Monday InfoSpace finally pulled the trigger, agreeing to buy Cedar Rapids, Iowa-based TaxACT for $287.5 million. It is a big bet for InfoSpace, which has shown more colors than a chameleon over its 16-year history. It also puts InfoSpace — which will grow to roughly 200 employees once the deal closes — into a completely different business.

But Ruckelshaus — who officially took over the InfoSpace reins in April — says that’s the whole point. Diversification is something that the company had at top of mind for many months. It also doesn’t hurt that the acquisition brings along 70 staffers in a business that generated $78.1 million in revenue for the 12 months ended September 30th.

We caught up with Ruckelshaus to chat about how the deal came about, whether more acquisitions might be in the works and how he feels about competing with the financial services juggernaut of Intuit.

GeekWire: How did this deal come together?

Ruckelshaus: “I think you accurately portrayed this as moving us into a new space. That has been a stated intent…. We went through some divestitures in 2007 which essentially moved us out of two of our three remaining businesses. Through most of the 2000s we had streamlined. When Jim Voelker took over as CEO from (founder) Naveen (Jain) in the early 2000s, we had 15 different businesses, roughly…. In his final act of streamlining, in that 2007 time period … a bunch of cash came onto the balance sheet. We (distributed) out a fair amount of the cash through two separate dividends, so that in 2008 we had a business that looked like a search operating business that you’ll recognize from the early days of (InfoSpace) and Go2Net, plus $200 million of cash on the balance sheet. We very purposefully left the cash on the balance sheet because the belief was … that the highest and best use of that remaining cash … was to put us into a new business that we thought could be an addition to the story, not supplanting necessarily the search story. That was very purposeful…. This has been a strategy that has been in place since early 08.”

GeekWire: Why buy into the tax preparation market? 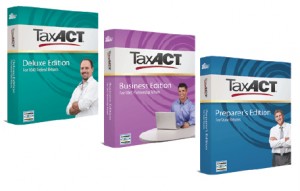 Ruckelshaus: “TaxACT … absolutely lines up with what we were trying to do. The more surprising thing, in many respects, would have been if we bought in search — because this was the stated intent to diversify and move outside of search…. This team has been in the tax prep market for 13 years. And they have an established reputation. Prior to founding this company, they founded a company called Parsons which was purchased by Intuit, and as you’ve probably picked up this business (TaxACT) was almost purchased by H&R Block. So, this is a pedigreed group of people in online tax preparation, and there is full intention to have 100 percent continuity of that team going forward in our combined company.”

GeekWire: How many opportunities did you look at over the past year or so?

Ruckelshaus: “I’d say, and this is not a precise number, but I’d say I’ve looked at 100 companies. The one thing we remind ourselves of, in addition to being comfortable moving outside of search, and I think you can probably appreciate some of the dynamics in the search market. We like the search business… But we also wanted to balance that relative to what we know as a company and the DNA of the company that we’d also be in a position to succeed with whatever we might acquire. To the extent that the business that we looked at was an online business, well that just makes a lot of sense. Because we are an online company. We’ve been on the Internet for well over 10 years. We know what it means to own and operate Web sites, and manage content on Web sites. We know what it means to acquire customers online, and develop products for online environments. And all of those disciplines are front and center with TaxACT, since it is an online business through and through. The cultural alignment was clear from the outset.”

GeekWire: Given all the opportunities you looked at, why tax preparation in particular?

Ruckelshaus: “There is a definite secular trend  that they are smack dab in the middle of as it relates to consumers increasingly using online solutions for their tax preparation…. It was an opportunistic situation. This was a company that was engaged in a longer than 12-month proceeding with H&R Block, only to find that the transaction that they’d announced in October of 2010 was not to be consummated, and that was last November. And this is one of those things where we have been pretty vigilant looking at opportunities, and this lined up on every criteria…. We are pleased with the outcome, and what at first might appear on first blush as being outside of search and therefore a head-scratcher is very much the point.”

GeekWire: How do you plan to compete with the 800-pound gorilla in the market: Intuit and TurboTax?

Ruckelshaus: “I’d start off by saying that there is a ton of respect on behalf of the TaxACT team for Intuit as a competitor in the marketplace. Obviously, they have quite a franchise with TurboTax. That being said, there are a couple of advantages that I think that TaxACT has that can be further exploited. The first is, to have someone out there, like an Intuit, that is evangelizing the marketplace…. Intuit was out there early with TurboTax to evangelize the migration from pen-and-paper to desktop software, and then more recently, along with other players like TaxACT, evangelize the migration from desktop software to online. We think there is a demographic tailwind that is fueling this migration.”

GeekWire: What else stands out over Intuit?

Ruckelshaus: “The market position of TaxACT is very much around price leadership. They have a value-based positioning where their price — despite what some of the messaging might be from its competitive set — advantage relative to other online competitors and certainly relative to incumbent providers in the offline world — the storefront guys as well as the assistive prep guys — is remarkable. That is quite an advantageous place to be working from, as opposed to the other way around.”

GeekWire: How big is the market?

Ruckelshaus: “The TaxACT solution is a better price, and we would argue a more fair price for 90 percent of the filers out there and the solutions they are currently using. So, the addressable market, it is a $20 billion market, and we are a more fair price for $18 billion worth of the market. So, we view it as an ample white space — and hopefully under the new ownership of the company — to go out there and be aggressive in the marketplace and win those consumers.”

GeekWire: This wipes out a lot of InfoSpace’s cash in one big bet, no?

Ruckelshaus: “It is actually just the opposite…. One of the things we had said is that we wanted to avoid the big swing, where we do just what you said. Though the stated deal price is very close to our ending cash in September … the intention is to finance this with $95 million in debt, and we have commitments to that effect and it could actually be slight more than that. So, pro forma cash at closing will be about $90 million…. I think the manner at which we’ve capitalized this has been very advantageous. First of all it is not a lot of debt, it is a very low level of debt and it is the type of thing that we are able to pay very quickly.”

GeekWire: So, will you look at other acquisitions?

Ruckelshaus:  “What I would speak to at this point is the optionality and the flexibility around doing that…. There is nothing on the drawing board right now. Obviously, in our prior evaluation, we turned over a lot of rocks. This business really stood out head and shoulders over anything else we saw for a lot of the reasons we discussed. And what we need to focus on over the near term is closing the deal, which we expect to happen in the first quarter, hopefully earlier in the first quarter. And then enabling the team to really perform during this peak tax season, which is now underway.”

GeekWire: I am assuming there’s no direct flight between Seattle and Cedar Rapids?

Ruckelshaus: “Funny you should say that.  We’ve said that Cedar Rapids gives new meaning to the expression ‘connecting flight.’ It is actually a nice place, and the people there are very nice and we really like the team.”