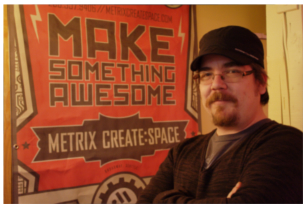 When you walk into Metrix Create: Space in the Capitol Hill neighborhood of Seattle, it’s hard to know exactly what you’ve gotten yourself into. With long tables piled with electronics, 3D printers tucked in corners, a vending machine that offers Arduino shields alongside M&Ms, and a large, looming Pick and Place peeking out from inside a glass room, you’ve either stepped into the future or onto the deck of the Enterprise.

Matt Westervelt, owner and founder of Metrix, considers it one part tech shop, one part hackerspace, one part coffee shop but 100 percent open to the public. As a public workshop with over 10 different “robots” at your disposal, the only limitation here is: “What can you make?”

Projects here range from writing software to laser cutting; from casting 3D ducks to soldering; from designing Arduino boards to 3D printing. Inkfarm.com visited the shop last week for 3D Thursday to talk with Westervelt about Metrix’s roots, where it’s going and the ever-evolving technology it houses.

How did Metrix start? 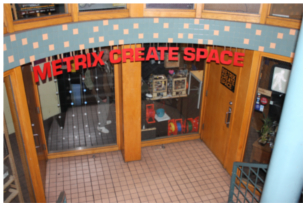 Westervelt: “Metrix came about because I started a project called Seattle Wireless in 2000, and it had this weekly thing we called “HackNight.” We had a space back in the early 2000s in Georgetown, which had computers and couches and fast internet. It was kind of like this but not open to the public. It was more oriented towards hacking on Wi-Fi, mesh networking and computer stuff. Eventually we dropped that space and started hanging out every week at cafés…. In 2009, I got a laser and thought: “What am I going to do with this laser?” One thing was to build a 3D printer, the other one was to start asking people: “What would you do if you had a laser?” It turns out that people all had different answers and really just wanted occasional access to laser – then I found this place.”

What’s meant by ‘hacker’ and ‘hackerspace?’ “Hacking means a lot of different things; it’s a pretty loaded term. Mostly, it’s: ‘I’m trying-to-get-something-to-work and I’ll hack at it.’ We’re all ‘pretendgineers’ here. The people who work here aren’t real engineers. Some of us kind of are, but for the most part, we’re doing things we’re interested in and hacking on things. People come down and they want to make stuff. It’s like: ‘Oh, I haven’t done that before, but I bet you we could figure out how to do it with the stuff we have lying around.’ Hackerspaces are generally collective projects like this, where it’s a space where people come to make things — to collaborate. This one is different in that it’s a commercial space; it’s open to the public. It’s not a communal kind of thing.”

How was it before you had a fixed space? “Before, hacknight was more of a group thing. We were hanging out, working on software projects, some hardware problems – it was mostly focused on how to build a Wi-Fi community. Although there’s a certain amount of hardware involved with that, it’s not the same. And we would just monopolize tables at coffee shops. We would generally show up at a place and take over….We would always find these places that were empty, and yet kind of interesting – and that we could just go in and take over. Unfortunately, a bunch of geeks sitting around using computers isn’t super conducive to the coffee business.” 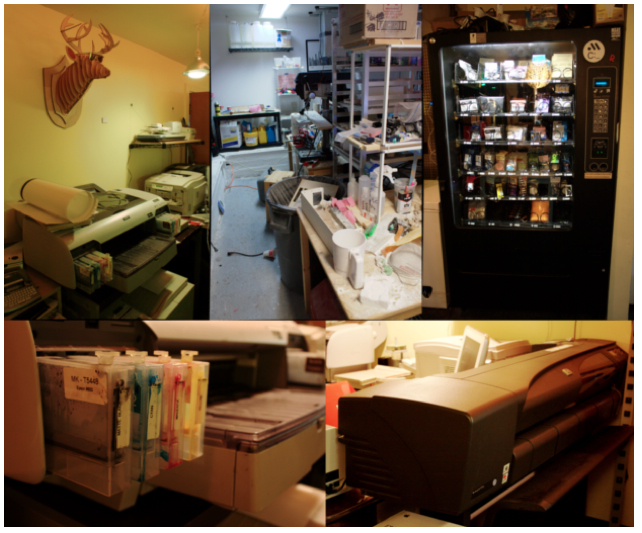 Do you get a lot of walk-ins? “Yeah, we get a lot of people walking in from the street. They’re like: “Hey, what’s going on here?” It says soldering on the sign, that doesn’t make any sense. Laser cutting, 3D printing – strange things, right? They’re going to restaurants, theaters, coffee shops and they see this. So they come down: “What is this?” Oh, it’s a 3D printer. “What is this?” It’s a laser cutter. “What’s that?” That’s a Pick and Place. We have this really strange shop full of robots.”

What is the hobotoken? “The hobotoken is just a piece of laser-cut coin. The idea behind it was that people felt weird about hanging out. In the beginning we had coffee, which we were only charging $1 for, but now coffee’s free because the robot is broken and we haven’t gotten around to fixing it….People felt really weird, because they’d come in, hang out and take up table space. They’re writing software, or something, and they feel like they’re not contributing to the shop. So we said: ‘Well, you know, you could get something [laser cut]?’ But they wouldn’t know what to get. So I figured out, we charge $2 a minute for laser cutting to make the hobotoken – which is pretty cool, it’s like this cool little coin thing, made of nickel. It [takes] three minutes of laser cutting, which would be $6, which is not too bad. So I charge $5 for it, and it is laser cutting for somebody who doesn’t know what they want… You could call it goodwill currency because that’s the whole reason you get them.”

How many people visit on a daily basis? “…There’s always someone here. A lot of people wander in, so we give the tour and I’m generally doing some production work throughout the night. There’s people; there’s always people. We hit over 100 [members] a little while back, and there’s churn. The member number is over 100, but not all of them are active.” 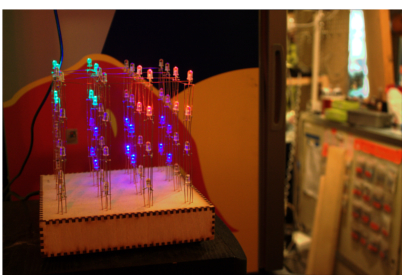 When did you start doing workshops? “We’ve had an Intro to Electronics and an Arduino workshop every month since we’ve been open. They’re almost always sold out – like, 10 people a month learning how to read data sheets, how to make schematics, how to use a simple microcontroller, how to make a circuit – we’ve been in this for 2.5 years, so there’s a lot of people who know enough to be dangerous right now…. We want more people to understand this, and we’re always willing to host a new workshop too…. We just had a Logic workshop. It’s kind of funny because that is probably the oldest tech. But it’s neat because all the Arduino stuff, all the microcontroller stuff is how to do stuff with code. The Logic workshops show you how to do things with just base Logic and components – which is neat because that’s not buggy code at that point.”

Any new machines? “Our newest tool is this Pick and Place machine. That will give us the ability to place electronic components on circuit boards.” 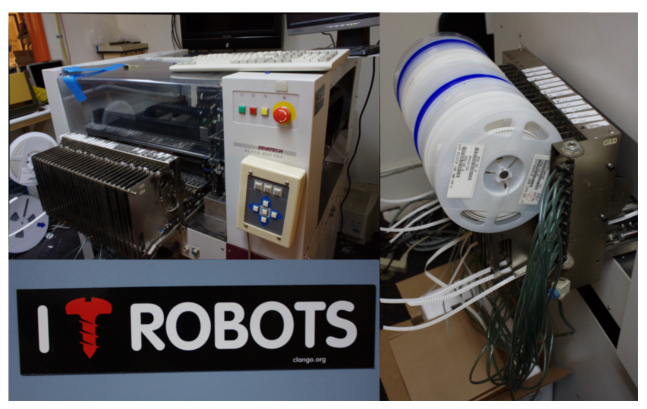 What’s the mission with Metrix? “My goal is that you can walk in here at the beginning of the day with an idea or something really cool – whether it’s a product or it’s for your own personal gratification or a customized electronic – and make it, start to finish. You can sit here, use the Internet and figure out how to do it. Maybe take a workshop that says here’s how you do certain board designs, here’s how you make schematics, here’s how you play with electronics – and there’s generally somebody around that can help you with this sort of thing….People are scared of electronics in the U.S. It seems like a lot of the electronics knowledge disappeared with big, easy-to-use components. So when everything got small, people were like “I don’t know, it’s hard” and stopped paying attention and stopped trying to understand.

What’s the most ambitious project you’ve seen at Metrix? “There have been a lot of ambitious projects. 3D printers, I would say, are probably the most popular ambitious project. And I’m saying this because I’m looking at one and my memory is like a gnat. A 3D printer involves a lot – you have to learn about everything involved in it. There’s the mechanical part, there’s the electronics, there’s the physical assembly as well. It’s not just the mechanics of the thing; you actually  assemble it fully. There’s a software component to it, and then a design component too….By the time someone is done with one of these things, they’re really good at it. They’ve soldered all the pieces, they’ve built all of these components, and they generally know where all the problem points are. Nearly everyone who builds one of these things, their first project after that is to build another 3D printer. Because now they know a lot about that particular thing and they want to apply it. And they know about all the problems that they just had. So they’re going back into the design phase and fixing it.” 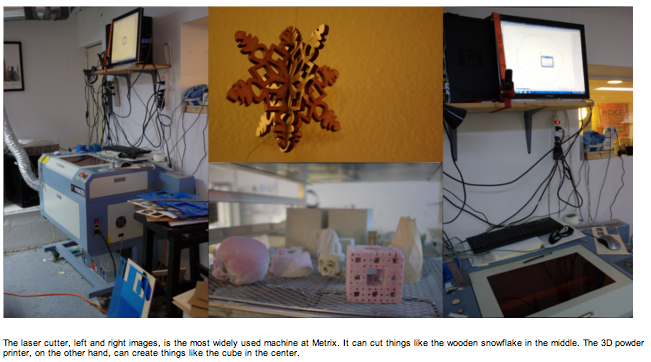 Are there currently any plans to expand Metrix? “Right now, Metrix is really new and we’ve expanded already. When we started off, we were half the size that we are now. After one year, we knocked down one wall and took over [the other business south of here]….Every six months, we completely rearrange everything just because we get a new machine or we realize that it’s become too dense, that we have too much stuff. So we cycle around the shop and figure out how to make it work.”

On technological advancement: “People are becoming less afraid of physical things now. For a long time, the Internet was really difficult. I remember the beginning of the Internet, of the beginning of the popularization of the Internet – in the early 90s, I got into this Internet thing and I was like “Man, this is really cool.” So I showed everyone I knew and I was like “Hey, you have to get in on this site, it’s really cool” and they asked “’Why would I want to do that?” So I would have to explain why the Internet was cool.” 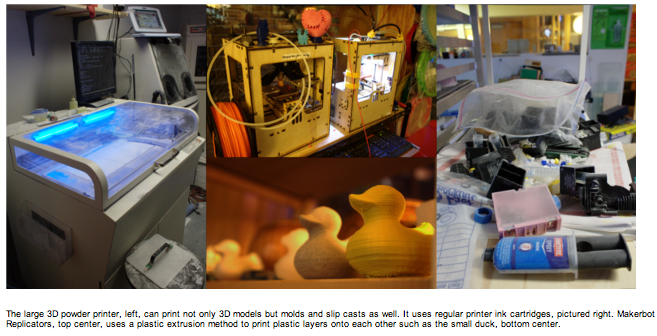 I want to do cool things – I want to make fun things – I’m like “Well, I don’t understand how this works, let’s tear it apart and figure it out.” Get the camera, take some pictures, and we can either put it on the Internet or we can read or look at other people’s pictures on the Internet and we can figure out how to build it ourselves, customize it, make it ours. And because of [the Internet], we can do it.”

Sabina Cao is the content creator and blog manager for the Inkfarm.com blog: Take Back Your Printer! For the full interview with Westervelt, check out the blog.