Entrepreneurs, by their very nature, are optimists. This shouldn’t come as a big surprise. You’ve got to be a bit positive if you want to take the startup plunge.

That optimism is on full display in a report being released today by Silicon Valley Bank, which surveyed more than 270 U.S. software, life science, clean tech and hardware executives during the month of February. Just how upbeat is the group?

Consider this: Six out of 10 startup execs believe things are better than a year ago, and nearly two thirds of the companies reported revenue expectations that either met or exceeded targets. Meanwhile, 72 percent of those surveyed said that business conditions will continue to improve in 2012, a key election year in the U.S. as the candidates debate economic issues.

Speaking of the election, the entrepreneurs aren’t too pumped about their choices come this November, with eight percent of voters saying that the presidential candidates have not proposed solutions to spark the innovation economy. Meanwhile, 60 percent say that the U.S. education system is not preparing future employees.

Here’s a look at some of the results: 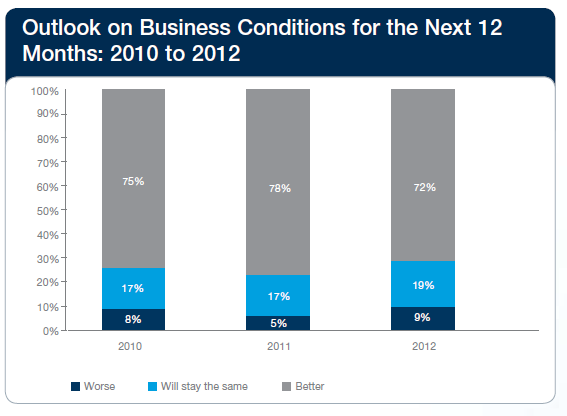 “To a significant extent, we believe this optimism is well founded. Over the past three year, the economy has begun to strengthen and startups have performed well. But some of the confidence probably reflects the inherently optimistic nature of startup entrepreneurs,” the report says.

The survey also found that startup execs plan to boost hiring in the coming year, with 83 percent expecting to increase hiring. 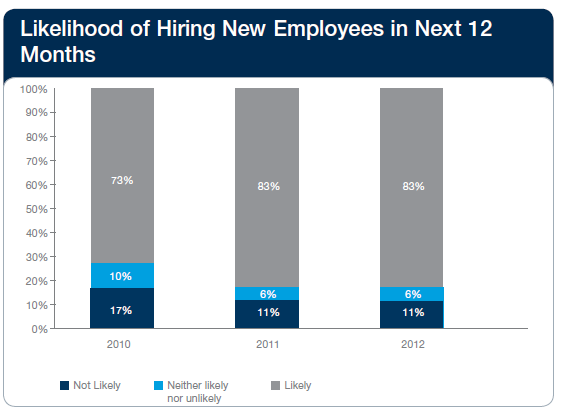 The optimism does vary by sector, with the report noting that 90 percent of software execs plan to hire in the next months. However, that number falls to 73 percent and 71 percent in the hardware and life science sectors, respectively.

The survey also laid out some of the key areas in which governmental policies could help spark more innovation. Here were the six priorities of those surveyed: