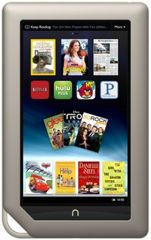 Barnes & Noble just confirmed that it’s releasing an 8GB Nook Tablet, and the price may sound familiar: $199, the same as Amazon.com charges for its rival Kindle Fire tablet.

Also notable: In addition to reducing the storage, Barnes & Noble cut the RAM to 512 MB on the 8GB Nook Tablet. The 16GB Nook Tablet (which sells for $249) boasts 1GB of RAM, a selling point for the Nook Tablet in the competition with the Kindle Fire.

The announcement of the 8GB Nook Tablet confirms a report yesterday by The Verge. The price wasn’t previously known.

Numbers released last week by research firm iSuppli showed the Kindle Fire with 14 percent market share among media tablets in the fourth quarter — second only to Apple’s iPad (at 57%) and twice the market share of Barnes & Noble’s Nook Tablet.

The company said sales on BN.com rose 32 percent, to $420 million, as a result of growth of in Nook device and digital content sales, overcoming a decline in online sales of traditional books and other physical products.