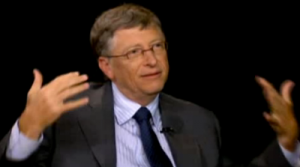 Charlie Rose aired a wide-ranging interview with Bill Gates earlier this week, with much of the hour focusing on philanthropy and global issues. But one portion zeroed in on technology, exploring the current state of Microsoft and its competition with other tech giants.

Gates’ comments about Microsoft’s Surface tablet made headlines. He called the device “a seminal event of taking the best of the two worlds and bringing them together.”

However, he wouldn’t go so far as to suggest that Apple will be forced to follow Microsoft’s lead, saying “it’s premature to act like that’s been decided in the marketplace.”

But what caught my attention were the exchanges about Gates’ ongoing role inside Microsoft. It’s no secret that Gates has continued in a part-time advisory role at Microsoft since leaving day-to-day duties at the company. But details have been scarce.

Gates told Rose, “There are new projects that I get to suggest that they work on, and a number of those have been staffed and are moving along.”

So what are those projects, exactly? Rose didn’t ask that question, specifically, but he did ask Gates what excites him. In response, Gates provided some clues about his ongoing Microsoft work.

I think that the way we organize information, we’re just at the beginning. Think of your family memories and how you go back and review those things. Think of the whiteboard in the office and say, why can’t I just walk up to it, and when I start to scribble ideas, it helps organize those, retrieve things, and when I go back and look at what I did. I can connect up to some other person’s whiteboard. We are just really at the beginning of this digitally empowered way of doing things. So I get to have a few projects that I promote, and they’re actually very nice to me in listening and taking some of them on.

For the record, Gates disposed of the traditional question about whether he has ever considered coming back to Microsoft full time, even for a moment.

“No, I put time into Microsoft and I couldn’t be more proud of what they’ve done with Windows 8 and now the Surface,” he said. “But my focus is on the foundation.”