Supermarkets are increasingly adopting self checkout terminals. But Seattle entrepreneur Aaron Roberts, a former engineer at RIM and Attachmate, believes he’s come up with a better way for people to do their shopping at the local grocery story. It’s called QThru, and the young upstart just raised $3.5 million from undisclosed angel investors to start rolling out the concept beyond its initial test store at The Ridge IGA Supermarket in Snoqualmie.

Here’s the basic idea. Customers download an iPhone app (Android is coming soon) and preload their credit card information. They then add items to their shopping cart, scanning a bar code each time they pick out an item. After they complete the shopping trip, they check out by entering a passcode and scanning a QR code at a kiosk machine. A receipt is generated from the kiosk, and a supermarket employee checks it to make sure items match before sending the shopper on his or her way.

Roberts said he came up with the idea a few years ago while standing in line to buy a pumpkin pie for Thanksgiving dinner.

“There was a line for the pumpkin pies, and there was a line to checkout,” recalled Roberts. “While I was waiting I said: ‘Gosh, this process doesn’t need to be this painful.’ It seemed like a no-brainer to me.”

Even though he’d been kicking around the idea for a couple years, Roberts didn’t form the company until last year.  It now employs five people, including former interim PopCap CFO Karla Horowitz.

For the past several months, QThru has been available only to select customers at The Ridge Supermarket. But the company expects to go public in the coming days once Apple approves the free iPhone app. At that point, anyone can install the app and head to the grocery store aisles at the Snoqualmie IGA.

Roberts said that they plan to roll out additional installations with the Myers Group, the owner of the Snoqualmie IGA and other regional supermarket and hardware stores, in the coming months. Tyler Myers, president of the Myers Group, said that initial tests were “enormously popular,” adding that he’s excited about the possibility of adding exclusive announcements, events and coupons.

In addition to those add-ons, grocery store owners like the idea since they are able to collect detailed shopper analytics, creating the possibility to target customers with specific offers.

Obviously, grocery stores like the concept of collecting data on their customers, something that online retailers such as Amazon.com have mastered. 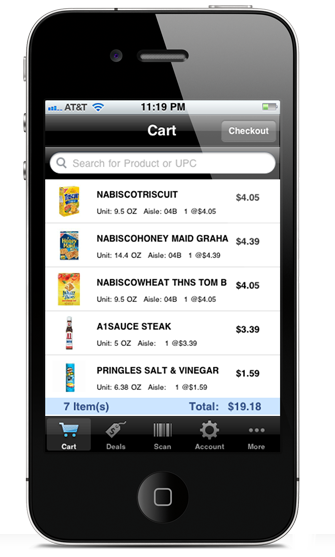 How is QThru different from the self checkout terminals at the local Safeway or Fred Meyer?

For one, Roberts said that customers can see how much they are spending before they get to the checkout aisle. The customized offers also allow shoppers to reduce their overall bill, and notifications can remind people if they are about to run out of toilet paper or cat food, he said. But the big selling point, he said, is speed.

“There’s no line to stand in. QThru is so fast, we can replace four checkout lanes with one QThru kiosk,” said Roberts, adding that initially they plan to outfit stores with customer service reps to help answer questions.

The supermarket as we know it is getting ready for a makeover. And we’ve certainly seen a lot of activity in this space in recent months. In Seattle, Point Inside has been pivoting in recent months to develop mobile shopping technologies for grocery stores. Meanwhile, two of QThru’s main competitors have been acquired in recent months. In April, Boston-based AisleBuyer was gobbled up by Intuit and Modiv was purchased by Catalina Marketing.

“We are kind of the last man standing who does this whole soup-to-nuts thing that we are doing,” said Roberts, adding that Modiv doesn’t have credit card payments integrated into the device. That means customers have to transfer payments to a checkout system.

“We just see that as too much friction,” Roberts said. “People for years have been paying for things with stored credit card information, like on Amazon, so why can’t we do the same thing with brick-and-mortar?”

Speaking of Amazon, Roberts said that retailers like the QThru system since it can reduce the problems with “showrooming.” That’s the concept of brick-and-mortar retailers serving as the showroom, and then having customers complete their purchases online. Roberts also said once customers establish a grocery store list, retailers could begin to offer online shopping and in-store pickup or delivery. That would allow them to compete head-to-head with the likes of Amazon Fresh and Safeway’s online grocery service. 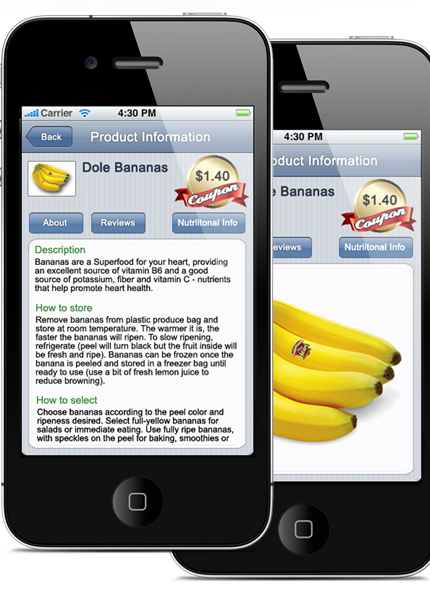 Roberts said they plan to target mid-tier grocery stores and retailers, noting that the QThru system allows them to compete with the big players.

“A lot of these guys don’t want to spend $70,000 on a self checkout kiosk, and our solution can go from no cost on the hardware up to about $5,000 would cover a decent-sized store,” he said.

Of course, with any self checkout system, theft is an issue. Roberts said that the system can be configured so that retailers can highlight specific items on the receipt, say a $50 bottle of wine. That, of course, could create more work for clerks who will need to spend their time doing inventory of what is in a person’s shopping cart.

“Costco has gotten pretty good at it,” said Roberts.

In terms of the new funding round, Roberts said that the company has received a commitment of $3.5 million from two out-of-state investors who have invested in technology companies in the Seattle area in the past. At this time, QThru is only drawing down $1 million of the round.

Here’s a closer look at how QThru works: