We’ve been digging up details this week about a Seattle-area startup that is developing robots to explore space, led by the former flight director for NASA’s Mars Rover missions, along with some of the biggest names in commercial spaceflight, and backed by investors and advisers including Google’s Larry Page and Eric Schmidt, along with filmmaker James Cameron. 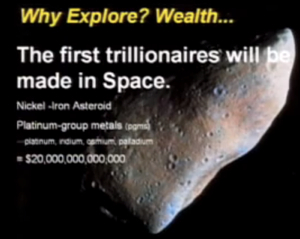 What exactly is this venture going to do? We won’t know for sure until Tuesday, when the company will hold a news conference to unveil its plans.

But for some big clues, check out the video video of a 2005 TED talk by Peter Diamandis, the X Prize Foundation leader, who is listed in Washington state records as chairman of Planetary Resources Inc., the startup behind the space robot venture. The Verge pointed to the video today, after the MIT Technology Review said it sounded like the company would be mining asteroids.

Here are the key excerpts from the 2005 talk by Diamandis …

I think it is a moral imperative that we open the space frontier. It’s the first time that we’re going to have a chance to have planetary redundancy — a chance to, if you would, back up the biosphere.

If you think about space, everything we hold of value on this planet — metals and minerals and real estate and energy — is in infinite quantities in space. In fact, the Earth is a crumb in a supermarket filled with resources. …

We have these huge rocks, killer sized rocks in the hundreds of thousands or millions out there. … If you think about these other asteroids, there’s a class of them, nickel-iron, which in platinum group metal markets alone are worth something like $20 trillion if you can go out and grab one of these rocks.

That’s very much in line with the invitation for next week’s news conference, which says the new company “will overlay two critical sectors – space exploration and natural resources – to add trillions of dollars to the global GDP.” It adds, “This innovative start-up will create a new industry and a new definition of ‘natural resources’.”

The mission of the venture, the invite says, is “to help ensure humanity’s prosperity.”

Stay tuned for more details as they unfold, and we’ll be attending the news conference next week at Seattle’s Museum of Flight.