Grandma is still playing Solitaire on the computer, research confirms.

A report from the Nielsen research firm says classic PC games such as FreeCell, Solitaire, Hearts, Minesweeper and other titles commonly preinstalled on Windows PCs are still being played by an average of more than 20 million people a month — an impressive number in an world of Facebook games and mobile apps.

That’s the good news. The bad news, at least for the long-term viability of the games, is that the audience is, well, not young.

“As new tech and devices emerge, it’s easy to assume that older versions of games, or just old games in general, would fall out of favor,” write Nielsen researchers in a blog post last week. “However, old habits die hard, and familiarity with programs and games can have a lot to do with the long tail of gameplay. This particular data for pre-installed games skews heavily towards an older demographic, which presents an opportunity for developers/publishers to perhaps find ways to make their free-to-play games as easily accessible and bundled in as possible for this audience.”

To put the 20 million figure in perspective, Rovio reported 50 million downloads of “Angry Birds Space” in a little over a month.

Here’s a chart showing the age of users of the most popular pre-installed PC games. 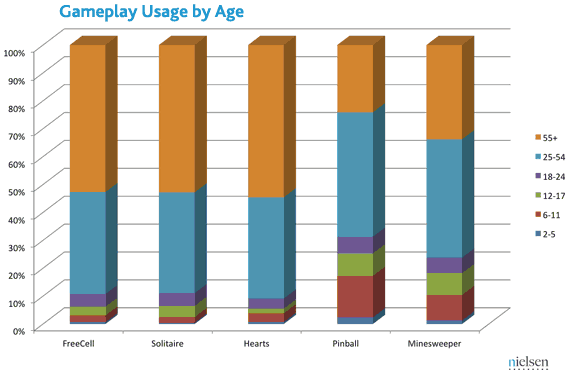