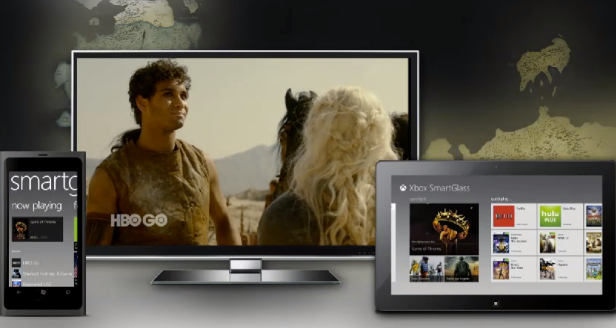 The announcement came a short time ago at the E3 video game convention in Los Angeles, confirming rumors that emerged over the weekend. It’s an attempt by Microsoft to strengthen its position in the living room by making the Xbox 360 more of a digital hub.

Examples shown by the company include the ability to synchronize content between the console and devices, and use a tablet as a way of getting custom information about the content on the television screen — such as a live map on a tablet that explains what’s happening on screen during an episode of “Game of Thrones.”

Microsoft already offers a basic companion app for Windows Phone for finding and controlling content on the Xbox 360, but the company is effectively expanding that technology to new devices and adding new features. A basic version of SmartGlass will be released later this year, but it’s expected to evolve significantly over time.

As part of the news, the company also announced that it’s bringing Internet Explorer to Xbox 360 this year, for browsing the web on the console, with the option to control the web browsing experience from a device. It will launch worldwide this fall.

“Xbox Smart Glass works with all the devices you already own,” said Xbox Live chief Marc Whitten during a webcast of the company’s briefing at the show.

Separately, Microsoft announced a new “Xbox Music” service that will offered by the company, one of the last nails in the coffin of the company’s Zune brand. Microsoft executive Yusuf Mehdi described it as “the music service we have always dreamed of building,” saying it will be available across Xbox 360 and Windows 8 PCs, in addition to tablets and phones.

Earlier in the presentation, Microsoft announced new video streaming deals with media brands including Nickelodeon, Paramount and Univision. The company also unveiled expanded sports programming, saying that the NBA and NHL will be joining Major League Ball on Xbox Live, in addition to expanded ESPN programming.

Microsoft opened the event with an extended preview of “Halo 4,” the pivotal game launch for the Xbox 360 this fall.