Microsoft’s new Surface tablet is the first computer developed end-to-end by the longtime software company. So how is the hardware? Equal parts cool and disappointing, at least in my initial experience.

After using my family’s Surface for a couple days now, I’ve come to understand why Microsoft’s initial wave of advertising has focused on the satisfying “click” of the TouchCover and TypeCover keyboard accessories when they snap into place at the bottom of the screen. The execution is so good, with the magnets pulling the keyboard into precisely the right place, it’s difficult not to attach properly.

I’m significantly less enamored with the dimensions of the tablet. At 10.81 x 6.77 inches, the Surface is longer and not as wide as the iPad, which comes in at 9.5 x 7.31 inches. That’s not necessarily a good thing. In portrait mode, the Surface is so tall and skinny that it’s bordering on ridiculous to use.

Overall, the hardware feels solid and well-put together, although the edges on the back of the tablet make it less comfortable to hold in the hand for a long periods of time. That’s one of the places where the iPad seems to me to have a far superior approach, with its curved backside.

The USB port is a big plus, as are the HD video out port and the microSD card slot.

In addition, the Surface kickstand has come in handy quite a few times — for example, letting me place the Surface on the table to let my daughter Skype with my parents.

Or at least, she would have Skyped with my parents if we could have gotten the app to work. We had repeated connection problems, and they’ve persisted even after I installed the available Windows Updates at the suggestion of one of my Twitter friends. I was able to connect to my parents via Skype on my Mac instead, so it’s not a problem with either of our networks. 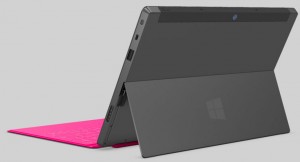 Others on Twitter say they haven’t had any problems with Skype on Windows 8, so for Microsoft’s sake I’m hoping that my problems represent an isolated incident.

Separately, in the realm of experiments, I’ve been trying to tether my iPhone to the Surface, to use the Apple device for an Internet connection when I’m out and about, but I haven’t had any luck. The Surface doesn’t recognize my phone as an available wireless connection, even when the Personal Hotspot is turned on in iOS. Bluetooth and USB tethering don’t work either. If anyone has any luck on this front, please let me know.

Also in the realm of experiments, this was even more of a stretch, but I’ve also been trying to figure out how to automatically sync photos from our iPhones, via the cloud, to the Surface photo library. I know it sounds unreasonable, but this possible on Windows versions for x86 machines, using Apple’s iCloud Control Panel for Windows, but of course the Surface runs Windows RT for ARM processors, which means that software doesn’t work. (I tried, just to make sure.)

I played around with the SkyDrive app for iPhone and found at least one iPhone app that syncs pictures to SkyDrive, but the key here is automatic syncing, along the lines of Photostream. If anyone has any advice in this area, as well, please let me know.

Or, uh, maybe we’ll just have to break down and get Windows Phones, too. Haha. Gulp.