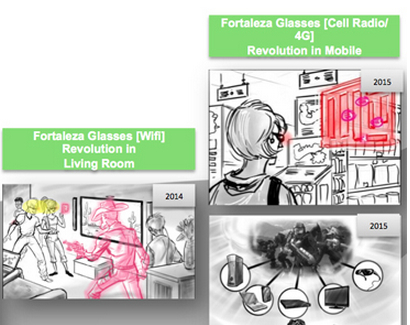 It’s being called the “Mother of All Microsoft Leaks,” a 56-page document that details plans for the next version of Microsoft’s Xbox game console.

One big caveat: Even though the document appears real, it’s still nearly two years old, and needs to be taken with a big grain of salt.

That said, the general direction for the “Xbox 720” is very interesting. In addition to improving the underlying hardware, and making the console more powerful, the document lays out a strategy to turn the next Xbox into more of an entertainment hub, with background television recording and Blu-ray support.

But what really caught our attention was the section on Project “Fortaleza,” a plan to release augmented reality glasses that would work initially in the living room with the next Xbox over WiFi (in 2014, according to the document) and later on the go, using 4G technologies (in 2015).

Because the document dates back so far, it suggests that Microsoft had this vision long before Google went public with its similar “Project Glass” initiative. It looks like the next big battle between Microsoft and Google could be in this area of AR glasses, with Microsoft leveraging the strength of the Xbox brand and Google building on the growth of its Android ecosystem.

The document has been removed from Scribd at the request of a law firm that represents Microsoft — more evidence of its authenticity — but the Verge does a good job of rounding up the highlights.

The timeline (as of 2010, at least) called for releasing the next Xbox in 2013. The document refers to the console as the Xbox 720, but our hunch is that the code name will be replaced with a catchier product name by the time this new console is released.