Sometimes, it’s just a little hard to catch our breath around here at the GeekWire HQ. And February was certainly one of those months. A lot of the things we’ve been working on in the past few weeks aren’t quite ready for public consumption, but gosh darn are we excited about the fun things we’ve got in store.

Let’s just say it is going to be a very busy Spring around here.

We’ve been putting a lot of the puzzle pieces in place for what we think will be a full slate of exciting new editorial features, events and special surprises in the coming weeks. Things will get rolling next Wednesday, with the GeekWire Summit & First Anniversary Party.

Folks from 10 different states are flying in for the half-day conference and birthday bash (I can’t believe we are turning one), which features speakers such as angel investor Hadi Partovi, former Microsoft CTO Ray Ozzie and Hulu CTO Richard Tom. If you haven’t already, make sure to get your tickets here.

But, as you know, we’re all about the tech news here at GeekWire. And, as they say, the news never sleeps. (And we don’t much these days either). So, without further ado, here are the most popular stories on GeekWire for the month of February. Check em out, and let us know your favorite. 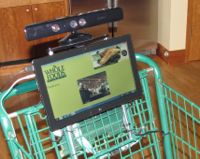 How these geeks pulled off one truly amazing light show at CenturyLink Field (3 comments, 199 Tweets)

Office on the iPad: A litmus test for the modern Microsoft (21 comments, 59 Tweets)