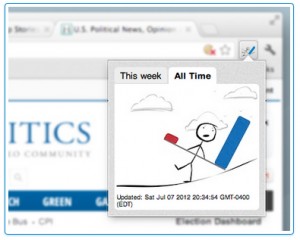 It’s an election year, which means a lot of mud is being slung in various media outlets. Oftentimes, it’s hard to find the truth among all of the clutter.

But a new online tool could help identify biases in news reporting, pointing consumers of news to other viewpoints, especially when they’ve been fed too many “talking points” from the left or the right.

Dubbed Balancer and developed by University of Washington assistant professor Sean Munson, the the free plugin for the Chrome browser watches what news you consume online and then tells you whether your reading history leans right or left. It then goes a step further, offering recommendations on news outlets or stories which may provide a different viewpoint.

“I was a bit surprised when I was testing out the tool to learn just how slanted my own reading behavior was,” said Munson in a press release. “Even self-discovery is a valuable outcome, just being aware of your own behavior. If you do agree that you should be reading the other side, or at least aware of the dialogue in each camp, you can use it as a goal: Can I be more balanced this week than I was last week?”

I know some of my my friends and family who could benefit from this tool — in part because they’ve moved away from quality sources of information in favor of outlets that masquerade as news outlets. (Too bad Balancer isn’t available for print publications and cable TV).

This is a fascinating experiment for news junkies, and I just installed the plugin myself after completing a 4-minute survey that asks multiple choice questions to gain a better sense of one’s political leanings and personality (However, it requires a month of analysis before offering feedback on one’s news viewing habits).

The plugin analyzes some 10,000 news Web sites, tracking where they are on the political spectrum, from “far left” to “far right.”

Here’s more on how it works from the UW public relations team:

“People who install the tool get a cartoon of a tightrope walker holding a stick with a red block on one end and a blue block on the other end. If their reading is balanced, the blocks are equal and the stick is level. If not, the stick begins to tilt to one side as the character appears increasingly distressed.”

The plugin can’t grab all of your news reading habits. For example, it doesn’t track what you read on mobile browsers (frankly where I read most of my political news) or via traditional media (print, cable TV).

Munson’s research at the UW centers on how the Internet can be used to create constructive dialogue, getting away from what he describes as the “appalling cesspool” of partisan news sites.