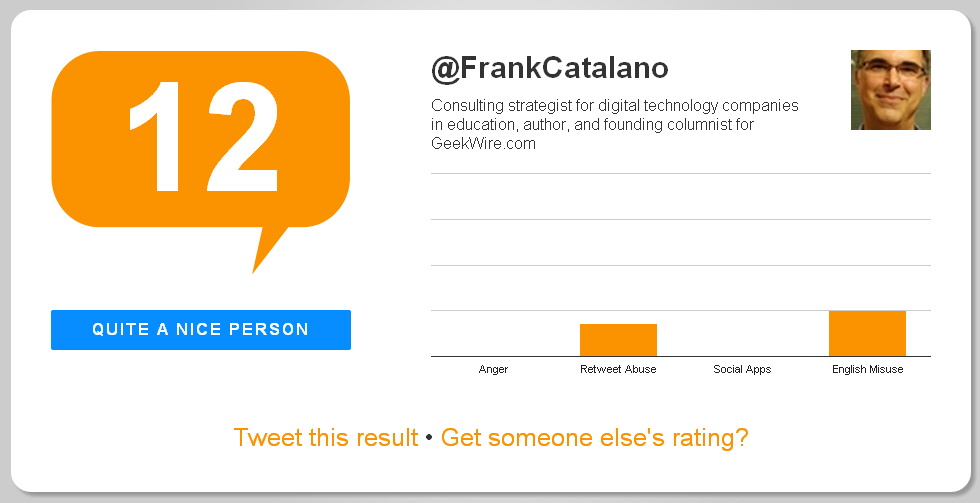 The latest evidence is Klouchebag, a parody of Klout’s influence score that launched earlier today. And if the name of the site isn’t enough to clue you in, you need only read the “The Standard for Asshattery” tagline.

The one-page site encourages you to enter your Twitter handle. Then it returns, Klout-like, a score based on four metrics: Anger, Retweet Abuse, Social Apps and English Misuse. Or, as the site summarizes it, the ARSE rating system.

Klouchebag’s FAQ states that it’s “about as scientific as Klout’s own measurements.”

I asked creator Tom Scott, who lives in London (thus perhaps slightly skewing the “English Misuse” metric), whether this month’s Wired feature story on Klout inspired Klouchebag — and indeed it did.

“I’d been annoyed with the idea of Klout for a while, and that article crystallised it. Today, I registered the domain name (sadly, “klunt.com” was already taken) and built the site in a couple of hours of spare time,” he wrote.

As to the social media community’s reaction to the site — or, potentially, its obsession? “Well, it only launched a few hours ago, so I can’t be sure — but so far, it’s been overwhelmingly positive.”

And then he notes, perhaps ominously:  “No one’s thinking of using it seriously, as far as I can tell.”