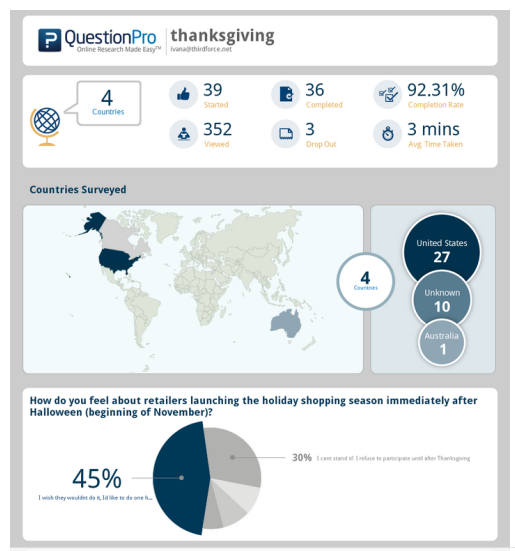 Nearly every day a new infographic arrives in our inboxes — touting things like holiday shopping trends or the history of digital photography. Now, through a new service from Seattle-based QuestionPro, we’re probably going to get even more of these visual representations of data.

QuestionPro has developed a new automated infographic generator, one which co-creator Vivek Bhaskaran says allows anyone to “create a sexy infographic … with a click of a button.”

Bhaskaran said that none of his competitors in the survey space offer anything similar.

QuestionPro, however, isn’t the only one attacking this niche. In fact, we just got a pitch earlier this month from a Malaysian service called Piktochart that boasts 90,000 users.

But Bhaskaran said that QuestionPro is different, given its roots in online surveys. The 10-year-old company already boasts more than 2.5 million users of its online survey tool

“There are infographics generators, but it takes a lot of work to get the data out of systems … and put them into that and generate the infographic,” said Bhaskaran.

With the new QuestionPro tool, the data is imported onto a set template, but customers can customize headers, footers and other elements. In the future, he said they plan to charge for additional template designs.

“Infographics are popular (because) they tell a story … instead of just shoveling data….  People want to see the story along with the data,” he says.

Here’s an example of an infographic created with the new QuestionPro tool.