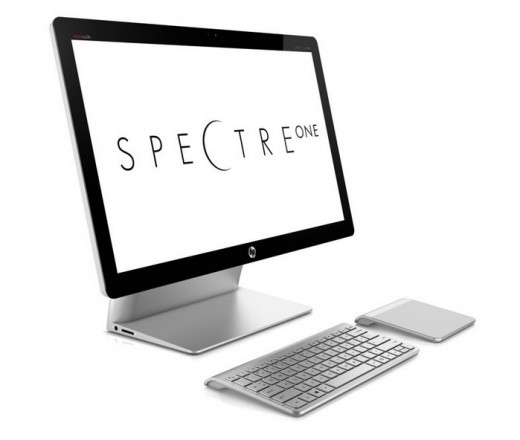 At midnight last night Hewlett Packard released their new line of all-in-one PCs, including the flagship, called Spectre One — apparently because the designers were haunted by the ghost of Steve Jobs. Upon viewing the photos now making the rounds on the internet, you’d be forgiven for thinking the desktop was a black-market iMac (or maybe something from the Vizio line announced earlier this year), as the resemblance is striking, right down to the Apple-aping keyboard and mouse.

Coverage today ranges from breathless and posthumously edited to pained and sardonic (“HP introduces new Apple iMac”). Late-night posts that reported the Windows 8-equipped Spectre One would come with a touchscreen were greatly exaggerated.

If you are interested in an HP iMac Spectre One, they release in November and include, among other things, 8 GB of RAM, USB 3.0 connectivity, HDMI-in (your choice of HDD or SSD), “a two-year subscription to Norton Internet Security, full version of Adobe Photoshop Elements, full Adobe Premiere Elements, and dedicated technical support lines.” The HP iMac Spectre One is also “one of the first PCs to include NFC (near-field communication) technology so you can use your NFC-equipped smartphone to login.”

At $1300, it will clearly be one of the most affordable iMacs on the market.

In following with tried-and-true, good-news-then-bad-news press-release scheduling, on the heels of last night’s release comes the news that HP will lay off 29,000 workers through a combination of involuntary cuts and early retirement offers, according to a regulatory filing.