Looks like a travel company is finally teaming up Matt Harding, the dude behind the global dancing phenomenon Where The Hell is Matt?

US Tour Operators Association announced that they will visit locations around the world next year with Harding to “capture and spread the joy and freedom of exploration he shares in each of his travel videos.”

“As USTOA continues to evolve and grow consumer awareness of the benefits of traveling with a tour operator, our board of directors and executive committee challenged us to ‘go big’ this coming year,” USTOA president and CEO Terry Dale said in the announcement.  “We’ve found the perfect partner in viral video star Matt Harding who embodies the core messages of our members: the joy of travel, delight of discovery and freedom to explore.”

I’d say it’s a pretty good investment on USTOA’s part. Harding’s most impressive video, a compilation of him dancing all around the world in place like Afghanistan and Haiti, has nearly eight million views on YouTube and is a must-see clip that is both compelling and creative. The New York Times even went as far as calling it a masterpiece.

USTOA also writes that the Where The Hell is Matt YouTube channel is the most-watched travel channel on YouTube.

This isn’t he first time Harding has teamed with a company. He was sponsored by Stride, the chewing gum company, and earned some endorsement bucks a few years ago. 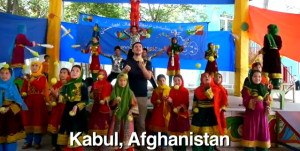 But this new deal seems a bit more extensive. Dale expects Harding to travel around with US tour operators and have a completed video to debut next spring.

“I am very excited about this newest partnership with USTOA,” Harding said in the release. “The association and its members embrace the same principals of exploration and collaboration with people from all walks of life around the globe. I can’t wait to hit the road with them.”

Harding, a former video game developer who lives in Seattle, came on our podcast this past summer to tell the story of his unlikely climb to online fame, how his approach has evolved, how YouTube and the Internet have changed since he started, and a bit about the making of the video with eight million views.

You can read more about how Harding came up with the dancing idea on the about page on his site.

Previously on GeekWire: Podcast: Where The Hell is Matt? On our show!