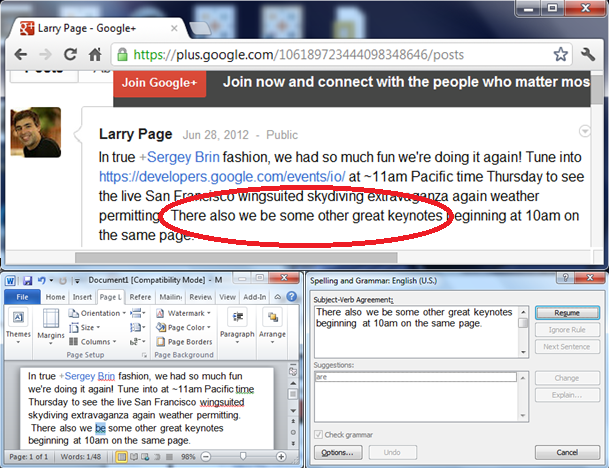 We hesitate to bring this up, having made more than our share of grammatical mistakes and typos over the years. (Heck, over the past week.) But here’s a situation that Microsoft’s marketers should probably turn into an ad for Microsoft Word.

A post last week by Google CEO Larry Page on Google+, highlighting the events at the Google I/O conference, includes this line: “There also we be some other great keynotes beginning at 10am on the same page.”

Of course, Page meant to write, “There also will be some other great keynotes beginning at 10am on the same page.”

No, it’s not the worst mistake anyone has ever made, and all but the most attentive grammar cops probably read right past it.

But the interesting thing is that Microsoft Word’s grammar checker would have alerted him to the problem, flagging the sentence for improper subject-verb agreement. Word’s suggested solution wasn’t quite on the mark, as you can see in the screen capture above, but hey, at least he would have known to fix it.

We ran the same sentence through Google Docs, which doesn’t see anything wrong with it at all. That’s because Google Docs has built-in spell check, but not grammar check.

Either that, or the algorithm knows it’s never smart to correct the CEO over something so trivial.