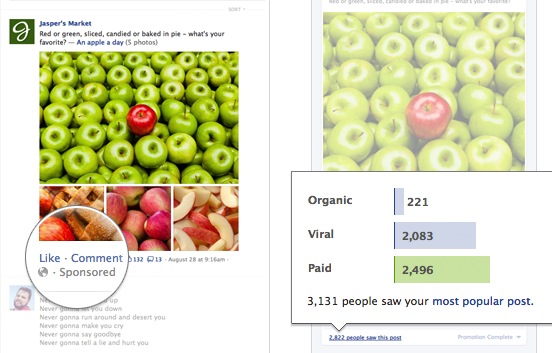 A billion users? Whatever. Here’s the real evidence that Facebook has arrived: Companies are freaking out about a change in its algorithm.

People who run Facebook pages for businesses large and small are grappling with a major change in the secret Facebook formula that determines which content appears in users’ newsfeeds.

The adjustment in what’s called the EdgeRank algorithm has reduced the organic (unpaid) exposure received by Facebook posts from companies. At the same time, Facebook is campaigning aggressively to get companies to pay for promoted posts to increase the reach of their content.

The change was made on Sept. 21, but the reaction is building as companies come to terms with it.

“This change is more than just a minor tweak,” writes social marketer Jeff Doak in his analysis of the situation. “This is Facebook doubling down and admitting that they really don’t have any interest in brands having a real relationship with the fans they’ve accumulated. This is admitting they don’t know how to create a real ad model other than making brands pay to talk to the fans they may have already paid to find and cultivate.”

Others are giving Facebook more leeway: “I have had a good run over 3 years of using their service absolutely free,” writes photographer Trevor Dayley in a post on the Fstoppers site. “There is no way I would have been able to build the business I have and reach so many people without it. Is it really that bad of a deal to have to pay $10 to promote an album every so often to use their service.”

The argument in favor of the EdgeRank change is that it’s designed to encourage more quality content and improve the Facebook experience by reducing the perception of “spam” in the newsfeed — instead favoring posts that receive stronger engagement in the form of likes, comments and sharing. Facebook’s algorithm rewards that engagement, and it also ends up costing less for brands to promote a post that’s getting strong engagement.

Facebook says in a statement: “We’re continuing to optimize News feed to show the posts that people are most likely to engage with, ensuring they see the most interesting stories. This aligns with our vision that all content should be as engaging as the posts you see from friends and family.”

Using GeekWire’s Facebook page as an example, our reach on Facebook went from more than 20,000 people per week before the algorithm change to 9,200 people immediately afterward, but has since risen to about 13,000 people. We don’t regularly use promoted posts to extend the reach of our content on Facebook, but we’ve talked about it and done some limited testing, prior to the change.

The changes come during Facebook’s initial months as a public company, a new era that brings increased scrutiny of its short-term revenue prospects and long-term growth potential. Many of the big questions about the company’s future are in the area of mobile devices, where newsfeed real estate is especially scarce.

In some ways, the reaction is similar to what happens after a change in Google’s core search algorithm — illustrating just how big Facebook has become in the corporate world.

If you run a Facebook page, you’ll be able to see the impact of the changes in your “Insights” analytics dashboard. Geoffrey Colon has tips for Facebook page owners dealing with the changes on the Social@Ogilvy blog.

Has your company felt the impact? How are you adjusting to it? Stay tuned, we’ll be following this story as it evolves.

Updated at 9:15 a.m. with Facebook’s statement and more context.