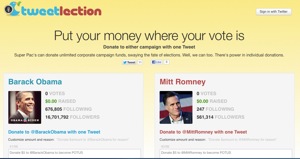 Portland-based Chirpify is helping this year’s presidential candidates raise funds by allowing users to donate to either Obama or Romney’s campaigns via Twitter.

The Twitter-based commerce platform will allow users to give money to either candidate via its new in-stream Twitter donation platform, launching today. Chirpify also reports that at least 25 other U.S. senators and representatives have also committed to fund-raising via the social media platform during this election season.

Additionally, the company launched a “Tweet a Presidential Candidate” website. Donors can give and track campaign contributions with a tweet at tweetlection.com, after signing up for Chirpify account. The page also features a handy scorecard of both Obama and Romney followers and how much money each candidate has raised via Chirpify so far.

Chirpify CEO and founder Chris Teso said in the company’s release: “There are hundreds of millions of dollars being raised for U.S. political campaigns every year, and an estimated 140 million Twitter users. Yet until now there was no way to directly exchange currency on Twitter. It is a no brainer to introduce Twitter Fundraising for Politicians.”

Whether donating to campaigns will be as fun as the Colbert Super PAC Super Fun Pack will be up to you.