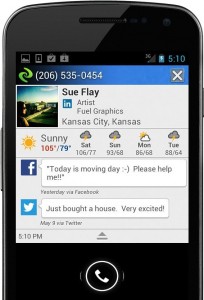 WhitePages is introducing a new Android app today called Current Caller ID that displays not just the name of callers but also their recent status updates from Facebook, Twitter and LinkedIn, plus information from their location, such as weather and news.

Yep, this might just be the ultimate app for chit-chat.

It also works with text messages, and lets users browse through their most frequent callers to check out their status updates. Other features include analytics in a graphical dashboard, showing how often and when you talk with different contacts, among other data points.

The free app from the Seattle company is scheduled to make its debut in the Google Play store later today.

WhitePages also makes a directory and search app for iPhone, but Apple doesn’t give developers access to the underlying call log. As a result, the Current Caller ID app is Android only, for now.

Here’s a video from WhitePages showing the main features of the new app.