We had a great time talking with Aaron Levie, the CEO of Box, during the closing keynote at Startup Day this past weekend. The 27-year-old entrepreneur from Mercer Island talked about a range of topics — including his daily schedule, raising money and competing with Microsoft — but the conversation focused heavily on the opportunities for startups in the enterprise market.

You can watch the full video above, courtesy of the excellent team at Bootstrapper Studios, and we’ve transcribed some of the highlights below. In addition, you can access the MP3 file here if you’d prefer to listen on your favorite mobile device.

Thanks again to everyone who joined us this weekend. We’ll be rolling out more video highlights in the days ahead.

How his experience as a magician translated into being a startup CEO: We’re trying to go hopefully express what we think the future should look like, by using our technology but more importantly the technology that the ecosystem is coming up with. The job of any founder or entrepreneur for that matter is to paint the picture of that future state that everybody wants to be a part of. So that’s what we do at Box, it’s what you have to do as an entrepreneur, and certainly have had to do that for quite some time in other experiences.

Advice for companies trying to find a profitable niche in the enterprise market: Don’t try and find a niche. In fact, one of the challenges with being a startup and particularly up here where Microsoft is so dominant, is you think you have to build a niche play, and you have to build a niche product, because that’s the crack that you’re going to fit into. I think it’s much better to build a wedge that becomes a much broader platform and a much broader company and you get to much into a niche mindset because you think that this big, lumbering giant is going to control the world and the ecosystem until the end of time, and it turns out that the way big companies get created is by going after these small ideas that become the nucleus or the seed to what can be much larger.

Overcoming early hiring challenges: We had a hell of a time trying to find people early on, and that was because people just didn’t think that our idea was going to work. Why would I go waste time for a couple of years working on a company that wasn’t going to be successful? We learned through that experience that it is all about the vision. It’s all about, what are you trying to build and change that other people want to be a part of that process and that experience, and then going after the best possible people that you work with to go do that. That’s what we did at Box. 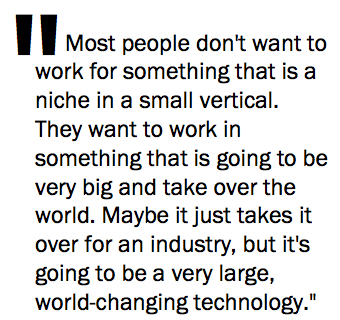 Competing with Microsoft: We started the company in 2005, so we’ve been doing this for quite some time, and when we started the company, we didn’t even know the word SharePoint. We didn’t even know probably how to spell the word enterprise. It was this brand new world that we were entering. What were just trying to solve was, how do you make it dead simple for people to share information and share data between teams and individuals, and when I want to go access my content from different devices how do I get to it from anywhere. We didn’t think about who were going to attack or supplant, or what niche we were trying to fill. We just saw this problem, and we thought it was pretty meaningful, and we went after it, and what we found in the process was that ultimately we were solving a much broader and a much larger issue inside an organization, and so we used that as the wedge of, how do you build a platform that people want to work from, that people can share information on, that people can get to from any device and application, and that ended up being the advantage that we had against the traditional players. Now, fast-forward 7-and-a-half years, we actually work with Microsoft in a number of areas, so ultimately it’s created some interesting partnership and relationship opportunities.

Persuading investors and employees to come on board: The thing that I don’t think we realized for the first couple of years in building Box was that investors by default don’t want to invest in your company. They’re not going to convince you, particularly initially, that you should take their money. We didn’t realize that our job was to reduce every possible amount of risk in their head, and every possible chance that this was not going to be a big company in their head. The only way to do that is by making sure that an investor or new employee can extrapolate out the best possible scenario of what this can become, and I think that’s missing from a lot of companies that are two or three people, that haven’t realized that it’s all about letting their imagination be framed in the way that you want, that is going to produce the most likely way that they’re going to be insanely excited about what you’re doing. That has to do with market sizes, that has to do with what is the future state that you’re trying to create, that has to do with how broad can the technology can be. Most people don’t want to work for something that is a niche in a small vertical. They want to work in something that is going to be very big and take over the world. Maybe it just takes it over for an industry, but it’s going to be a very large, world-changing technology. 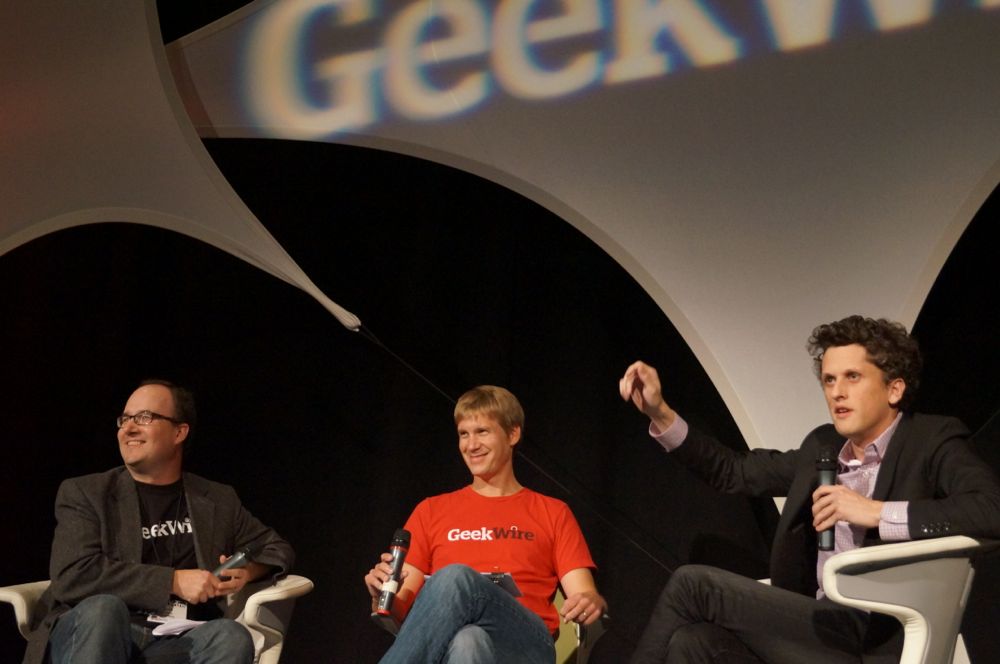 The culture at Box: I certainly think the easiest way to not work at Box is if you’re too slow, and if you’re not getting the shit done that we need fast enough. And so we look for people who are going to be very fast, that aren’t going to need a lot of resources. Those are obvious all-startup things. I would say the thing that is more unique to us than any other company that we compete with is we often are the most consumer-like company that any enterprise person has ever worked at, and the most enterprise-like company that any consumer person has worked at. And so we take people that are enterprise-y but want to go be very disruptive and people that are consumer-y that want to go have a business model.

Funding the company in the early days, and the decision to seek venture capital: We funded the company initially with (co-founder Dylan Smith)’s online poker winnings. We started the company in spring of 2005. We came out to Seattle in summer of ’05. We raised a small angel round from a few investors up in Seattle, and then later that summer we raised a bigger round from Mark Cuban. Really we ultimately needed that capital because we just had a pretty obvious theory, which was, this market will be won by the company that gets the most traction, the most network effects going. The way to do that is to subsidize that growth, whether it’s in marketing or whether it’s in free space, or whether it’s in other things that we’re working on. So we wanted to make sure we funded that growth pretty quickly.

The next wave of technology disruption in the enterprise: It’s actually very clear to the investor community at least that the next wave of disruption in the enterprise is going to be probably more massive than we’ve ever seen. It’s going to come because fundamentally IT buyers and businesses are actually changing their IT environment pretty dramatically. We meet with CIOs of Fortune 500, Global 2000 companies basically every single day at this point, and every one of them is rearchitecting and developing the strategy for the next generation of their business, and a significant portion of their IT buying and their infrastructure and their technology is coming from names that are very atypical of the enterprise. It’s not coming from Oracle, it’s not coming from IBM. Salesforce has been doing this for a decade, so they’re pretty typical at this point, but they’re coming from brand new startups doing very innovative things, and it gives everybody an opportunity that wasn’t obvious in ’07. Now it’s like, this is going to be the big catalyst of change in the market today. 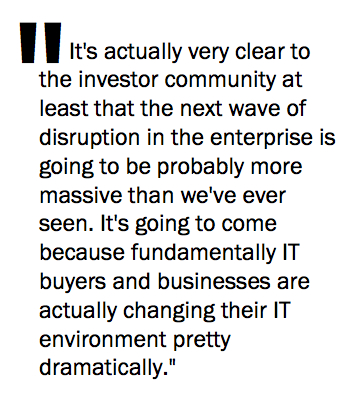 Who is your primary customer? The CIO, the IT person, or the end user? This is what we think the disruptive component of the enterprise is today. You focus on both. You build a business that end users can bring into the organization but can be reliable enough and can be sold to and can be integrated by that CIO or that IT team. We think that by leveraging both of the strengths of those two worlds, that’s the way to get ahead. IT is not going away. CIOs are not going away. They’re actually going to be more powerful because there’s an even greater abundance of technology today. They’re going to have to make some really strategic decisions about what technologies they want to use in their organizations. At the same time, end users are now completely empowered to bring in their own tools. So you are best off if you have a way to get to the end users to bring the applications into the organization, but to make it secure enough and able to be integrated and able to be supported by IT. … Enterprises have budget, end users don’t have time. So you get to the users with a free service, and you get to the IT buyers with the stuff that’s going to allow them to integrate it into their business but they have to pay.

Tell us about the entrepreneurial lifestyle. What time do you wake up? What’s your day like? Well, actually, the time I wake up will sound a little more like the frat lifestyle. I wake up at 10:30, 11 in the morning. I go to bed about 3. I only live on sleep. There’s not a three-hours of sleep model. That would be kinda crazy, that’s for the investment bankers. You need you mind to work in this business. … Finance joke! … I got one clap, come on I’m back in Seattle, we’re supposed to be hippies here. Too many Mitt Romney fans in this room? I’m not allowed to say that word in my household. So wake up at 10:30, 11, got to work, blast through the first part of the day, which is meetings, lots of things going on at all times, spun in all directions. Generally take a nap around 8 o’clock, and then you have four to five hours of really your time to go do the strategic stuff, answer all the emails from the day, come up with some new partnership strategy, some new platform thing. That’s the real fun time.

Those are just a few of the highlights. You can catch the full interview in the video player above. Other topics include raising money from Mark Cuban, how his age has been an obstacle, HTML5 vs. native apps, the role of mobile and more.

Stay tuned for more from Startup Day in the days ahead.