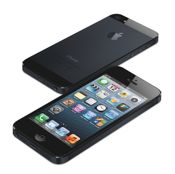 You’ve heard about the weekend blockbuster in the movies. Now, Apple has a similar hit on its hands in the gadget arena. The company announced today that it sold more than five million iPhone 5s in the first weekend, a record pace for the company.

It also announced that more than 100 million iPads and iPhones have been upgraded to the new operating system, iOS 6.

“Demand for iPhone 5 has been incredible and we are working hard to get an iPhone 5 into the hands of every customer who wants one as quickly as possible,” said Tim Cook, Apple’s CEO. “While we have sold out of our initial supply, stores continue to receive iPhone 5 shipments regularly and customers can continue to order online and receive an estimated delivery date. We appreciate everyone’s patience and are working hard to build enough iPhone 5s for everyone.”

Apple said that the iPhone 5, which has been criticized for its poor implementation of mobile maps, will be available in 100 countries by the end of the year. And Reuters notes that it is not the evolutionary design of the new iPhone 5, but the aggressive global roll out that is the crowning achievement of CEO Tim Cook.

Meanwhile, Apple’s stock is down more than one percent today, giving the company a market value of $647 billion. It briefly touched $700 last week in advance of the new iPhone launch.

Some analysts had expected that Apple could sell as many as 10 million new iPhone 5s before the end of the month.

Sterne Agee analyst Shaw Wu issued this note on the news about the company’s sales of five million units.

“We are not overly concerned with this “disappointing” number as we believe this is a classic case of near-term expectations getting out of touch with reality. We find it unfortunate that some analysts continue to publish irresponsible estimates without taking into account realistic demand trends and potential supply constraints on new in-cell touchscreens. At this point, we remain comfortable with our forecasts looking for 27 million iPhones in the September quarter and 46.5 million units in the December quarter. We continue to believe iPhone 5 will put a lot of pressure on competitors where it will incrementally capture a portion of customers attracted to larger screens and/or 4G LTE wireless.”