We’ve commented in the past on how San Francisco-based Trulia appears to follow in the wake of its larger Seattle-based rival, Zillow.

For the most part, Zillow has turned the other cheek, outflanking its competitor in areas such as mobile, mortgages and also becoming the first to complete an initial public offering.

But now, as Trulia prepares for its own public offering, Zillow is going on the offensive.

Zillow this week filed a suit against Trulia, alleging that its rival infringed on Zillow’s home valuation patent, the same patent used to protect its Zestimate service. The Zestimate has been a critical, and controversial, part of Zillow’s business almost from day one. It filed for a patent on the automatic home valuation technology in 2006, receiving patent 7,970,674 in June 2011. 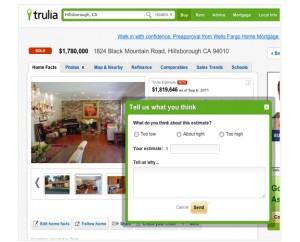 “Trulia’s blatant and ongoing copying of Zillow’s innovative approach to home valuation infringes Zillow’s patent and Zillow is entitled to damages and an injunction against further infringement,” the suit says. (Full copy below).

The patent suit comes at a critical time in the battle between the two companies. Just last week, Zillow raised $147 million in a public offering, following a successful IPO last year.

Trulia, meanwhile, filed for its own public offering earlier this year and is waiting to make the jump on to Wall Street.

Interestingly, Redfin rolled out its Home Price Tool — designed to help home owners get a better idea of what their property is worth — earlier this year. We’ve reached out to Redfin to see if they’ve been contacted by Zillow, and we’ll update this post as we hear more.

Here’s the full copy of Zillow’s 8-page complaint, which was filed in U.S. District Court in Seattle Wednesday. A Zillow spokeswoman declined to comment on the suit, saying that they do not “specifically comment on ongoing litigation.”

GeekWire’s initial report on Trulia’s launch of Trulia Estimates titled “Trulia takes a swipe at the heart of Zillow, launches its own home valuation tool” is cited in the Zillow lawsuit, with the company using it as an example of reports at the time indicating that Trulia’s service was similar. Other reports from Property Portal Watch and Online Marketing Group also are cited.