Television personality and engineer Bill Nye recently hinted that his popular “Science Guy” series might return with an online show. If this is any indication, there would certainly be an audience for it. 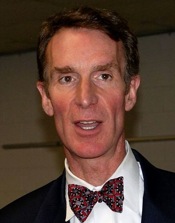 A video featuring Nye challenging creationism has gone viral on YouTube. Posted last week by the online video series BigThink, the video has 1.7 million views and counting. In it, Nye calls the denial of evolution relatively unique to the United States and says those who hold that position are holding us back.

He continues, “And I say to the grownups, if you want to deny evolution and live in your world, in your world that’s completely inconsistent with everything we observe in the universe, that’s fine, but don’t make your kids do it, because we need them. We need scientifically literate voters and taxpayers for the future. … We need engineers that can build stuff, solve problems.”

A former Boeing engineer, Nye moonlighted as a comedian and got his start on television on KING-TV’s “Almost Live” sketch comedy show, which gave birth to the “Science Guy” character. “Bill Nye the Science Guy,” produced by KCTS-TV in Seattle, started in 1993 and aired for five years.