The best observations, quotes, comments and zingers we heard this week.

“There’s a fundamental difference between people who want to see the Internet and say — ‘Let’s lobotomize and censor parts of it because we need to control it’ —  and those like us who see the Internet as a method of growing the economy and innovating in front of the world. And we have to actually reconcile those two positions. And we believe that it is much better to protect this crown jewel of civilization, which is the ability for us to communicate and express our ideas freely, than to try to lobotomize it.” —Ben Huh, CEO of Cheezburger, debating NBC Universal’s Rick Cotton on PBS’ The NewsHour about the controversial Stop Online Piracy Act and Protect IP Act.

“The bills have nothing to do with censorship. That’s a red herring. Like most technical rules written by bureaucrats, the bills are a mess. But the idea of protecting intellectual property is a good idea. It protects all of us. Why is one of the most vocal critics of SOPA (Cheezburger) a site which consists almost exclusively of stolen intellectual property?… Rather than just object, why don’t these companies work with Congress to pass a good law?” — A GeekWire reader commenting on the post: “Can this song help kill SOPA? ‘The Day the LOLcats Died.” 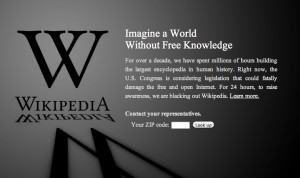 “Student warning! Do your homework early.” — Wikipedia’s Jimmy Wales, on Twitter, announcing the decision to black out the online encyclopedia for 24 hours in protest of SOPA.

“Wait, Wikipedia isn’t working? Why hasn’t someone invented a paper version of it? A set of books organized alphabetically by topic?” — Ben Shapiro on Twitter.

“Please don’t ask me anything until Wikipedia is back up.” — Braden Graeber on Twitter.

“Just saw a guy texting while walking and wearing headphones. Why not add a fucking blindfold?” — comedian and actor Denis Leary on Twitter.

“My daughter just characterized Apple’s textbooks in portrait as boring mode & landscape as awesome mode. In my day, it was all boring mode.” — Randy Stewart on Twitter, after Apple announced a series of new ebook educational initiatives.

“There’s so many opportunities for Google today, but to make a real impact in the world we need to make hard choices about where to focus our efforts.” Google CEO Larry Page, speaking on the company’s earnings call, about its newfound focus on core products like YouTube, Android and Gmail. A day later the search giant announced plans to shutter the online photo editing service Picnik and other products.

“NOOOOOOOOOOOO. I HATE GOOGLE FOR DOING THIS. I LOVE PICNIK. They are so… so… so… HEARTLESS!” —A GeekWire reader, one of many, upset over Google’s decision to pull the plug on Picnik. (Editor’s note: Picnik co-founder Jonathan Sposato is an investor in GeekWire).

“I got a Subaru Forrester, so I should be good.” —Paolo Mottola, creator of the parody videos: “Shit Seattle People Say When it Snows.”

“Part of the problem is that analysts still think it’s 2002, or maybe even 1998 — they still subscribe to the Microsoft-as-inevitable-leader theory.  It’s the assumption that, because Windows and Office have such commanding share, Microsoft will always find a way to get a large amount of share in any field it participates in. Mobile is different, and while Windows Phone is good, it’s not going to rock the Android or iOS boats just because Nokia’s name is attached to it.  Even a star player can’t always change the game if he comes in with five minutes left, and I’m not convinced Windows Phone has that kind of fight in it.” ––GeekWire reader Jonathan Fingas, commenting on a report from research firm iSuppli that Windows Phone could reach more than 15 percent market share by 2015, a prediction the research firm first made for 2012.

“There are 7 billion people on the planet. About 500 million people own a smartphone. What quarter do you suppose we’re in?”–GeekWire reader, commenting on the same report.

“Despite intensifying competition and the loss of some high-profile licensees, the usage of Microsoft Corp.’s Windows Mobile operating system in smart phones will nearly triple from 2009 to 2013, allowing it to reclaim the No.-2 position in the global market.” –– the same research firm, iSuppli, in a 2009 forecast.