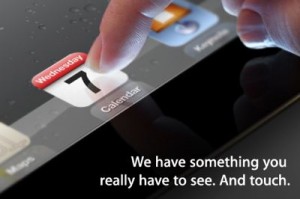 Haptic technology is commonly associated with force feedback in video games — the shaking of the controller in sync with what’s happening on screen.

But a company in Finland called Senseg has developed a different kind of haptic technology for “feeling” what’s on screen, including hard edges and soft surfaces.

It works via an electrostatic field that users feel when when they press their fingers on a tablet or another screen. And it looks like that company may be working with Apple to incorporate the technology into a new iPad, possibly the one that’s being unveiled later this morning.

Pocket-lint has the evidence, based on a very curious no comment from a Senseg representative. As CNet News.com explains, the clues go further back than that, with a Senseg exec telling Trusted Reviews previously, “We are currently working with a certain tablet maker based in Cupertino.”

It would also explain the teaser in Apple’s media invitation, saying that they have “something you really have to see. And touch.”

Apple’s event starts at 10 a.m. Pacific down in San Francisco, and we’ll have official details as they emerge.