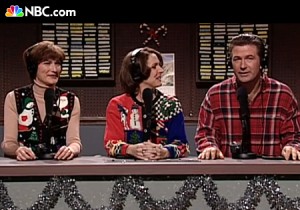 This is my favorite time of the year. Because it’s the only time when there are no public broadcasting pledge drives.

But wait. While I was typing this sentence my mainstay NPR station announced it was beginning its “December celebration” of a “Favorite Things” weekend. They don’t say “pledge drive,” but there it is: the frequent interruptions, the awkward banter between two hosts who have said the same things so often they descend into rote babble, the clever-yet-guilt-inducing recorded appeals from NPR celebrities and the bribery of a “thank you gift” at certain giving levels (albeit with holiday CD twists).

Now, no season is safe.

Don’t get me wrong. I love public broadcasting. I happily donate to not only aforementioned news and jazz KPLU Tacoma/Seattle, but also news and information KUOW Seattle and classical KING-FM Seattle, which went the public radio route last year. I give to stations in cities to which I travel regularly, even though it seems pledge drives follow me from one city to another, in sequence, like a clueless stalker who never tires or shuts up. I donate to KCTS 9 public television (where you actually get to see, not imagine, the awkwardness behind the rote babble).

I even write analysis pieces on education technology for the NPR/KQED education website MindShift. I have earlobes in the game. But I grimace whenever the begging starts.

There has to be a technological solution. If KING-FM can modify its on-air programming to be more like Internet radio, there must be some app or device to allow me to listen to broadcast signals in real time, un-annoyed, once I’ve donated. And I challenge the Seattle tech community to develop it.

Public Radio Fastpass. Very unlike the Disney theme park ticketing system of the same name (except for the time-saving concept), the Fastpass is issued immediately upon donation. This unique alphanumeric code is punched into a web app (for live streaming) or a control module/device for speakers through which passes live broadcast audio. Activated by the annually re-issued donor code, the web script or module recognizes, compresses and edits out, in real time, pledge breaks which begin and end with a signal inaudible to the human ear.

The only potential flaw is what happens when an hour of programming only takes 40 minutes. In those cases, the app/device switches to a pledge break-free live HD Radio signal which has the added benefit of containing all the programming that was replaced by rote babble.

It turns out KQED San Francisco has actually tried something like this, directing pre-drive donors to a live alternate web stream. But it’s only one station and doesn’t help those who rely on broadcast signals, such as while driving. 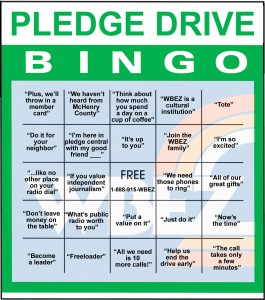 Audio TiVo. Some original XM Satellite Radio models had the capability, as TiVo does for television, of letting you pause live broadcasts. Now we need a digital radio that lets you pause and fast forward. It wouldn’t require much in the way of changes at the broadcast stations: just use multiplexing to send a time-advanced version of the live signal before it’s on the main broadcast channel. Ten minutes ought to do it. Anyone accidentally listening to the wrong signal in real time will simply be fashionably early to work or dinner.

Tip to manufacturers: Only sell these slight-time-shifting radios directly to public radio stations. They will become the most coveted donor premium ever.

I tried to ask my Facebook and Twitter peeps for more ideas. I know there are podcasts. I know there are stations with alternate, non-mainstream programming on HD Radio (I own a desktop model). I know I can find a cassette tape recorder at a garage sale. Arvid Hokanson, KUOW’s assistant program director, even suggested a delightfully low-tech solution for very special donors: have a local public radio personality (such as KPLU’s Dave Meyer) sit with them on their commutes during pledge drives, filling in the breaks with conversation.

But I want to hear programming, especially news, in real-time without erudite street urchins proclaiming, “Please sir, we want some more!” I don’t care who builds it or get credit for the idea. Just make it. And give me one.

Heck, I’d donate to its Kickstarter project. And do have Alec Baldwin or David Sedaris promote the funding campaign — it’s the only good in broadcasts that are otherwise pledge-breaking bad.