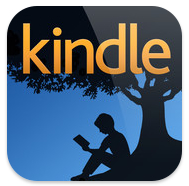 In addition, the company says it is bringing to its iPad app a favorite feature of Kindle Fire users — the ability to switch easily between content stored locally and content in the cloud. The feature is enabled by a new toggle at the top of the home screen of the Kindle iPad app, letting people switch between “cloud” and “device.”

At the same time, Amazon is continuing to keep its Kindle Store separate from its iPad app, offering it instead as a website that iPad users will need to visit in their browsers. Apple last year started taking a 30 percent cut of content sold inside iOS apps, and prevented app makers from sidestepping the revenue split by telling them that they could no longer link to external online stores from inside their apps.

Amazon and Apple are competitors in the e-book and tablet market, but Amazon’s business relies on content sales vs. hardware sales, and the Seattle company therefore offers Kindle functionality via apps across a variety of devices and the web.

Previously: Why this developer loves the new iPad, and how Steve Jobs inspired his latest creation