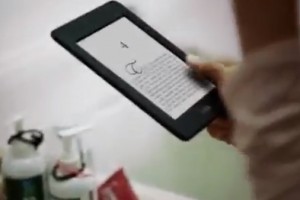 Amazon will hold a news conference Thursday in Santa Monica, Calif., where it’s expected to show its new Kindle lineup and possibly even a smartphone. I’m down in Southern California right now getting set to cover the event in the morning. But the company has already given a national TV audience a sneak preview.

In a highly unusual move, an Amazon ad that aired tonight during the Cowboys vs. Giants football game provided glimpses of what appeared to be a new Kindle reader with the rumored “Paperwhite” display, plus an unidentified tablet that could very well be a larger Kindle Fire.

Update: Here’s our post from the event in Santa Monica with details on all of the devices.

See this follow-up post for live coverage from the Amazon event today in California.

The ad was also interesting for the broader message it sought to convey about the company.

It began, “We’re the people with the smile on the box. We’re the reinventors of normal. We dream of making things that change your life, then disappear into your everyday. Of making the revolutionary routine. Our accomplishments are things you barely think about, but can’t imagine not having.”

“Connecting your mouse to your front door was our moon landing. Creating Kindle, our four-minute mile. Customer reviews, our light bulb. And when we build you something new, you can expect everything to change a little more. Look around. What once seemed wildly impractical is now completely normal. And normal just begs to be messed with.”

Follow-up: Jeff Bezos on the ‘Amazon Doctrine,’ and why it’s better than Apple’s approach

Here’s the ad, via YouTube. What do you think?